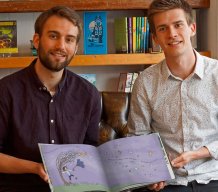 Young entrepreneurs who turned down an offer on TV programme Dragons’ Den now say their business is worth £2.6 million.

The concept was received warmly in the den, and the team were given an offer for the full investment from Peter Jones – but he wanted 20% of the business, which the entrepreneurs declined.

Since filming the show, One Third Stories have exceeded their revenue targets for 2017 by over 30% and have met their product expansion goals by publishing a further eight books and packs.

Books from One Third Stories start in English then slowly switch to French or Spanish, introducing more and more of the foreign language with each passing page.

Alex, who studied International Relations with Italian and Portuguese, said: “I think what's lacking in the UK is a fun and engaging introduction to learning foreign languages.

"The reality is that almost everyone in the UK will have a language learning experience, but unfortunately for most people it will be negative.

“Schools still focus on dry grammatical points and it's no surprise that kids drop languages as soon as possible.

“We want One Third Stories to become the gateway for kids to start their language learning adventure, and allow parents to support them in this.

“I think the potential in the UK and beyond is huge, and we’re grateful for the help and support we've received from so many people and organisations, including the University of Exeter.”

Customers of the company receive storybooks, along with audiobooks and fun activity materials each month.

The books are aimed at children aged between four and nine and currently help teach children French and Spanish, although there are plans to expand to include other languages.

Dr Darren Schreiber, Alex’s former lecturer in politics, said: “Alex was a fantastic student to work with; hardworking, insightful, and full of drive to make a difference in the world.

“As someone who didn’t learn a second language as a child and has struggled with Spanish for many years, I certainly wish I’d had the kind of head start they’re offering.”

Alex and Jonny were supported by Think: Try: Do at the University of Exeter – a student start-up support programme that enables students to create successful start-ups.

“Think: Try: Do was the first bit of support we received in the form of both mentoring and funding” said Alex,

“It’s great that we could access the help and I hope other universities take note going forward.”

Joe Pearce, Head of Business Support, said: “The dedication and achievement of our successful graduates is fantastic.

“We are always proud of how far they manage to go, and it’s great to see Alex’s work making such a big difference.”

The Think: Try: Do scheme has been supported by other Exeter alumni through donations to the Alumni Annual Fund.

Alex and Jonny’s invite to Dragons’ Den (which aired on Sunday 4 February) came after a successful crowdfunding campaign on Kickstarter, where One Third Stories raised more than triple their goal amount of £10,000.