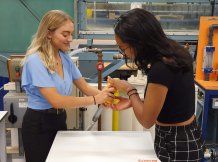 Plastic microfibres that come off clothes in washing machines can be degraded and dissolved by a new filter developed at the University of Exeter.

The “smart filter” catches microfibres and uses a set of enzymes to break down plastic into two by-products that are safe to be released into the water system.

While these two compounds (terephthalic acid and ethylene glycol) can be toxic at high concentrations, the volume of water released during a wash is enough to dilute them to a safe level.

At present, every wash cycle releases hundreds of thousands of fibres – and more than a third of microplastics in the oceans are thought to originate from clothing.

The filter has been developed by PETexe, a team of ten Exeter students, and they are working with the support of premium domestic appliance manufacturer Miele to research solutions on this subject.

“Synthetic fibres such as polyester and nylon make up about 60% of clothing material worldwide,” said team member Rachael Quintin-Baxendale.

“Microfibres released during washing flow into our oceans, tap water, the food we eat and even the air we breathe.

“Our smart filter, designed to be fitted to the outlet of household washing machines, catches about 75% of these fibres and breaks them down.

“Degrading larger pieces of plastic this way would normally take a long time, but these microfibres are so small that we aim to fully degrade them between washes.

“We are currently experimenting with different enzymatic concentrations to find the optimal conditions for this to occur.”

The project’s sponsors and supporters include Google, SnapGene, IDT and XEROS, and team members will be meeting MP Steve Double at Parliament in November.

“The most common synthetic fibre used in clothes is polyethylene terephthalate (PET), and the main enzyme we use to break it down is known as PETase,” said team member Lydia Pike.

“We are also developing an app, allowing people to monitor and manage their filter.

“The app will also allow the sharing of data, which will be analysed to increase the efficiency of our enzyme and help reduce plastic pollution.

“Although our current focus is washing machines, it’s possible that filters based on similar principles could be used in places like clothing factories and water treatment plants.”

The filter, produced using a 3D printer, was developed for the iGEM international synthetic biology competition, which takes place in Boston (USA) in November, but the team hopes to take the concept further.