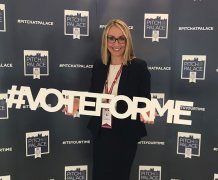 Olivia Champion is co-founder and CEO of BioSystems Technology

Scientist to face royals and Dragons

A Devon scientist will face royalty and the stars of TV show Dragons’ Den in a competition for entrepreneurs.

Dr Olivia Champion, of the University of Exeter, co-founded BioSystems Technology and will promote it at Pitch@Palace in London.

She has already won the Devon regional competition, and attended a “boot camp” on Wednesday ahead of the final at St James’s Palace on 12 June, when she will compete with 41 other UK tech firms.

An overall winner will be chosen at the palace event, and voting is also open for the People’s Choice Award for entrepreneurs who are “shaping the future of technology and changing the world”.

Biosystems sells insect grubs (Galleria mellonella moths) called TruLarv that can be used instead of mice and rabbits in experimental testing, reducing research costs and speeding up development of life-saving drugs.

“It’s very exciting to have won the regional Pitch@Palace event and to have an opportunity to pitch in the final in London, in front of such a dazzling audience,” said Dr Champion.

“This is really the networking opportunity of a lifetime, and I hope to present our alternative model to industry movers and shakers so they can understand the value of using insect larvae for screening.

“My hope is that the audience members who hear my pitch are able to influence the decision makers in health and life sciences organisations and encourage them to adopt the insect model.

“Looking forward, we plan to grow BioSystems Technology into the ‘go to’ company for alternative research models.”

At the Pitch@Palace boot camp, held at Imperial College London, entrepreneurs heard from industry experts and Pitch@Palace alumni, as well as receiving support and mentoring.

All 42 then pitched to a panel of judges – and the top 12, including BioSystems Technology, were selected to get three minutes for their pitch at the palace. The rest will get 30 seconds each.

The champion at the final event will be selected by the audience, which will include royalty, stars of TV show Dragons’ Den and many leading UK entrepreneurs and businesspeople.

The winner of the online People’s Choice Award will also be announced at the June event. Visit peopleschoice.pitchatpalace.com to take part.

The Duke of York, who founded Pitch@Palace, was present at the Devon regional event in February, when Dr Champion pitched in front of an audience of local business people.

BioSystems Technology started trading in 2016 and now export their TruLarv insect grubs to universities and industry laboratories in 14 countries.