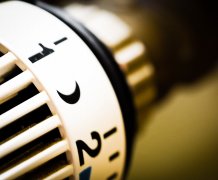 The RHI report examines the scheme’s success in encouraging homes and businesses to switch to renewable and low-carbon heating.

An Energy Policy expert from the University of Exeter has played a leading role in a high-profile report examining a national scheme’s success in encouraging homes and businesses to switch to renewable and low-carbon heating.

Richard Lowes, a key member of Exeter’s prominent Energy Policy group, acted as an expert advisor for the report, published by the National Audit Office, into the Renewable Heat Incentive (RHI).

The RHI scheme, introduced in 2011, is designed to encourage a switch from fossil fuel heating systems to renewable and low-carbon alternatives in homes and business premises across Great Britain.

The report, published on February 23 2018, assessed a number of the scheme’s key factors, including value for money, take-up rates and cost-effectiveness.

While the report concludes that the scheme offers a “novel approach” to increasing rates of renewable and low-carbon heating, and was delivered within budget, it also suggests the Department for Business, Energy, Industry and Skills has not achieved value for money, while an estimated £3 million in overpayments has been made as a result of participants not complying with regulations in 2016-17.

Richard Lowes, who is based at Exeter’s Penryn Campus in Cornwall said: “The RHI is the key policy attempting to start the UK’s move towards sustainable heating. However, in light of various delays and changes the scheme it is clearly under-delivering. Further still, where it has supported renewable heat it has delivered technologies seen to have a limited role over the longer term while under-delivering on technologies with strategic national importance.”

The report explains the rationale for the design of the RHI, the approach to implementation and take-up to date by homes and businesses. It also examines progress against the objectives of the RHI, the cost-effectiveness of the scheme and how the Department and Ofgem monitor progress and learn lessons.

It shows that the scheme has resulted in the saving of the equivalent of 4.5 million tonnes of CO2 – approximately one per cent of the total UK carbon emissions – with more than 78,000 instillations nationwide already in place.

However it concludes that the Department has not achieved value for money. It does not have a reliable estimate of the amount it has overpaid to participants that have not complied with the regulations, nor the impact of participants gaming them, which could accumulate to reduce the scheme's value significantly.

A copy of the report will be available from Friday, February 23 2018.