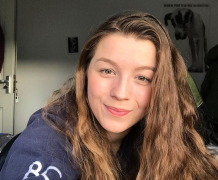 Brogan Coates (pictured) is set to kayak 83km in the campaign.

Brogan Coates, a second year marine biology student studying at the University of Exeter, is to join a team of women kayaking the length of Wales collecting plastic as part of a campaign to raise awareness of the damage that single-use plastics cause to our oceans every year.

The campaign, which first happened last year, is organised by ‘Love Her Wild’ an organisation designed to empower women into exploring the world around them.

The whole distance of 241km, from Ellesmere Port to Sharpness, is to be kayaked by a 17-woman team, with Brogan taking part in the last of the three legs, kayaking a total of 83km from Holt Fleet to Sharpness.

“Studying the marine environment and living in a coastal town has made me increasingly aware of the rubbish we put into our environment,” said Brogan, the second year marine biology student,

“Recently I have been reducing my own plastic waste - pretty hard on a high budget might I add - by buying local produce and cutting out certain foods. I’m also looking to home-make things like toiletries and cleaning products when I have time off from university.

“I wanted to make a difference to the lives of others and make those who don’t see or know the direct impacts of the plastic problem.

“We want to show the scale of the problem at the moment, let alone the other millions of tonnes of plastic that end up in our oceans every year.

“At the current rate, we may actually kill some of the species in our oceans before we get to discover them, just because of how appallingly we treat our planet.”

Last year, the team was invited to show off the plastic that they had collected at the Telegraph Travel show and the World Travel Market Responsible Tourism event, giving them a chance to physically show people what kinds of waste with which the oceans are being polluted.

When asked what the general public could do to combat the plastic waste issue Brogan said, “The average person can do so much, barely changing their daily routine. Shopping for local produce without plastic packaging is a huge waste reduction, both on plastic waste and emissions.”