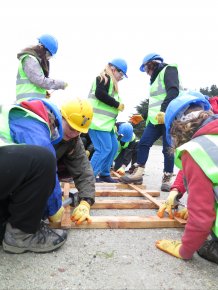 Year 8 competitors at a recent induction and training day

Cornish schoolchildren will be given a fascinating insight into the county’s rich mining heritage when they take part in a special competition next week.

Year 8 pupils from across Cornwall will compete in the inaugural Cornwall School Mining Games at the King Edward Mine at Troon on Monday, March 26 2018.

The event, organised by the University of Exeter and King Edward Mine, takes place from 10am-4pm, and will see the teams of 12-13 year olds compete in a range of exhilarating activities and contests based around age-old mining traditions, including panning for gold and hand drilling.

The competition coincides with the International Mining Games, hosted this year by the Camborne School of Mines, which will also be held at the King Edward Mine   from March 29-31.

Speaking ahead of the event Ruth Grimmer, from the University of Exeter, said: “We have been really impressed with the students’ enthusiasm and are looking forward to a fun day of activities.

“The students will learn about mining history and heritage and future employment opportunities in the mining industry, as well as getting hands-on experience of traditional mining techniques.”

Each school team has been paired with a competing mining games team for the duration of their training in the run up to competition week.

The students will be competing in 7 events -  Gold Panning, Track Laying, Hand drilling, Hand Mucking, Surveying, Swede Saw and Mineral Processing – which mirror those of the International Mining Games.

The overall winning team will be presented with the prestigious Kurt Jackson trophy, which has been kindly donated to the Games by Kurt and Caroline Jackson. Unique runners up trophies and medals will also be presented.

Kevin Baker, Director of King Edward Mine: “This event would not have been possible without generous donations from the World Heritage Site, Cornwall Manufacturers Group, Cornwall and Isles of Scillies Local Enterprise Partnership, Warwick geological Conservation Group. Thanks also to Macsalvors and Portreath Bakery for their support.”

This free event will be open to the public for individuals and groups to come along and learn more about the history and future of mining in Cornwall and cheer on the new generation of mining engineers.