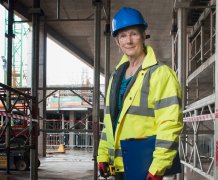 Striking portraits of Dr Sarah Buck OBE and Dame Clare Marx, members of the University of Exeter’s Council, will feature as part of a stunning exhibition celebrating the achievements of some of the most pioneering women of the 21st century.

The eye-catching pictures are two of 100 portraits displayed together at the Royal College of Art over the summer, to celebrate the centenary of the 1918 Representation of the People Act.

Organised by First Women UK, the exhibition features portraits of women who have been the first in their professional field to reach a certain position or achievement.

Dr Buck, who read Engineering Science at Exeter,  has been a member of the University’s Council since 2009 and currently holds the position of, Pro-Chancellor. She is honoured for being the first woman to become President of the Institution of Structural Engineers.

Dame Clare, an Independent Member of the Council, is honoured as the first woman to be made President of the Royal College of Surgeons.

The exhibition, for which celebrated photographer Anita Corbin captured all the portraits on show, runs from July 20-August 22.

Speaking ahead of the launch, Dr Buck said: “The suffragettes, in succeeding to get votes for women in 1918, achieved the first step in equality for women. I am delighted to be part of Anita Corbin’s inspired project that celebrates the centenary of their achievement. Women in engineering are still in the minority, so there is some way to go to achieve parity. I think that this exhibition will inspire future generations of women to become engineers and enter other non-traditional professions.”

The exhibition, which took 10 years to complete, celebrates the achievements of women across a range of disciplines including engineering,  sport, media, military, faith, business, arts, music and politics.

Baroness Elizabeth Butler-Sloss features as the first woman to be Lord Justice of Appeal, while Dame Hilary Mantel has the honour of being the first woman to win the Man Booker Prize twice. Col. Lucy Giles, who studied Biology at Exeter, is the first female commander of RMA Sandhurst.

Corbin has been documenting the lives of women since the 1980s, beginning with her series of informal portraits of young women, entitled Visible Girls. She has since worked as a photographer for a number of publications including ELLE and The Observer.

Speaking ahead of the exhibition she said: “I wanted to provide an alternative to the mainstream and create images of women that demand people look beyond the exterior and find the inner truth. I wanted to celebrate the impact women have had on society over the last 100 years.

“I hope that the First Women series will inspire future generations and help them see that it is possible to break down barriers whether they are social, economic, cultural or political. I want these powerful images to offer emotional support to women who seek to be the best they can be; those women who want to aim high and will look at my pictures and see they are not alone.”

The exhibition will be on display at the Dyson Gallery, Royal College of Art, from July 20-August 22. It is open from 12-5pm on weekdays, and entrance is free.