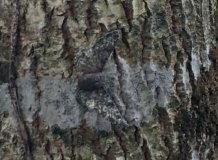 Scientists have revisited – and confirmed – one of the most famous textbook examples of evolution in action.

They showed that differences in the survival of pale and dark forms of the peppered moth (Biston betularia) are explained by how well camouflaged the moths are to birds in clean and polluted woodland.

“Industrial melanism” – the prevalence of darker varieties of animals in polluted areas – and the peppered moth provided a crucial early example supporting Darwin’s theory of evolution by natural selection, and has been a battleground between evolutionary biologists and creationists for decades.

The common pale form of the moth is camouflaged against lichen growing on tree bark. During the Industrial Revolution – when pollution killed lichen and bark was darkened by soot – a darker-winged form emerged in the UK.

The example has been well supported by many studies, but nobody had ever tested how well camouflaged the moths were to the vision of their key predators – birds – and how their camouflage directly influenced survival.

Now scientists at the University of Exeter have shown that, to the vision of birds, pale moths are indeed more camouflaged against lichen-covered trees than dark moths – making pale moths less likely to be eaten by birds in unpolluted woodland and giving them an evolutionary advantage.

“This is one of the most iconic examples of evolution, used in biology textbooks around the world, yet fiercely attacked by creationists seeking to discredit evolution,” said Professor Martin Stevens, of the Centre for Ecology and Conservation on the University of Exeter’s Penryn Campus in Cornwall.

“Remarkably, no previous study has quantified the camouflage of peppered moths, or related this to survival against predators in controlled experiments.

“Our findings confirm the conventional story put forward by early evolutionary biologists – that changes in the frequency of dark and pale peppered moths were driven by changes in pollution and camouflage.”

Most birds can perceive ultraviolet light – invisible to human eyes – and see a greater range of colours than humans, and the Exeter scientists analysed how well pale and dark moths matched lichen-covered and plain tree bark, as seen by birds.

To do this, they used museum specimens including some from the collections of Bernard Kettlewell, who conducted famous research on the evolution of the species in the 1950s.

The researchers also created artificial moths, baited them with food and observed predation rates in UK woodland, mostly in Cornwall.

“Crucially, this translates into a strong survival advantage; the lighter moths are much less likely to be seen by wild birds when on lichen-covered backgrounds, in comparison to dark moths.”

In the experiment using artificial moths, lighter models had a 21% higher chance of “surviving” (not being eaten by birds).

“We provide strong direct evidence that the frequency of the peppered moth forms stems from differences in camouflage and avian predation, providing key support for this iconic example of natural selection,” Professor Stevens said.

The research was funded by the Biotechnology and Biological Sciences Research Council (BBSRC).