A turtle tagged by University of Exeter scientists in Brazil has swum thousands of miles – and is now in the waters of a UK overseas territory.

The female leatherback turtle, nicknamed Fubica, is exploring the seas off Tristan Da Cunha, a remote group of volcanic islands in the South Atlantic – highlighting how interconnected our global seas are on World Oceans Day (Friday 8 June).

Fubica was one of four turtles tagged on a Brazilian beach during the breeding season in November 2017, and is the only one whose tag is still transmitting, more than six months later. 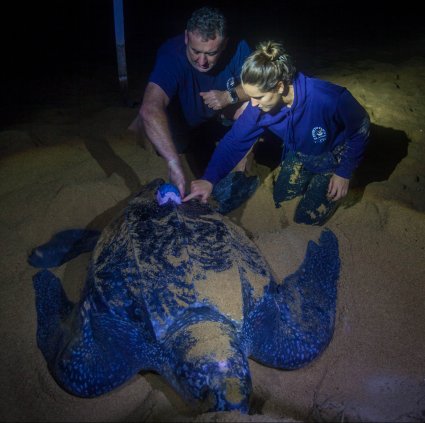 The turtles were tagged as part of a study run by Exeter and Brazilian non-profit organisation TAMAR-ICMBio, with funding from Funbio (the Brazilian Fund for Biodiversity).

“Fubica has swum thousands of miles and has now found her way to the protected zone around Tristan Da Cunha,” said Exeter PhD student Liliana Poggio Colman, who is on a scholarship from the programme Science Without Borders (CNPq), funded by the Brazilian government.

“These turtles only nest every two or three years, so we don’t expect her to return to land for many months to come.

“Some stay in the coastal waters of South America and others – like Fubica – cross entire oceans.

“She will be spending her time foraging for jellyfish, which makes up most of these turtles’ diet.”

“During this period she moved along the entire coast of the state of Espírito Santo, eastern Brazil, showing how important those areas are for leatherbacks.

“After leaving the beaches she spent a lot of time foraging off the Brazilian coast, where there is high marine productivity and intense fishing – meaning threats from nets and hooks.

“She then began to move eastwards, and is currently near Tristan Da Cunha (inside the UK’s Exclusive Economic Zone around the islands).” 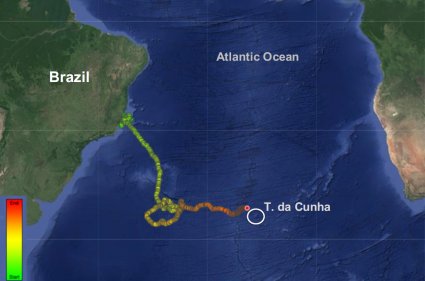 The research is supported by the Rufford Foundation and British Chelonia Group.

Liliana and Brendan will be part of the panel for a live Q&A with turtle experts from 2.30-3pm today (Friday) to mark World Oceans Day.