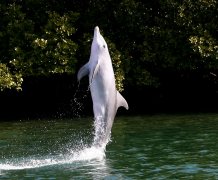 Tail walking rarely occurs in the wild but is performed in almost all dolphinaria (image credit: Dr Mike Bossley/WDC)

Wild dolphins learn tricks from each other

Dolphins learn tricks from each other in the wild, new research shows.

It is well known that captive dolphins are easily trained to perform tricks, but a new 30-year study examined how “tail walking” passed from dolphin to dolphin in the wild.

Tail walking – where dolphins rise out of the water and move backwards or forwards across it – rarely occurs in the wild but is performed in almost all dolphinaria.

The research, led by Whale and Dolphin Conservation with the universities of St Andrews and Exeter, focused on Adelaide’s famous tail walking dolphins

A single dolphin, known as Billie, was rescued from a polluted creek in January 1988 and spent several weeks in a dolphinarium before being released back in to the wild.

It seems she learned tail walking by observing the performing dolphins and, when released, began performing doing this in the wild.

This might have been nothing more than an interesting example of individual social learning – but soon other wild dolphins in the area began tail walking.

“I knew Billie’s history and was able to track her behaviour and that of the other dolphins in the community over an extended period,” said lead author Dr Mike Bossley, of Whale and Dolphin Conservation.

“This enabled me to observe tail walking spread through the community and then its eventual fade away.”

By 2011 nine dolphins had been observed tail walking in the wild. After 2011 the number declined, with the most prolific tail walker dying in 2014, leaving only two remaining tail-walkers, both of whom performed the behaviour only sporadically.

Tail walking now seems destined to disappear from the community.

“Understanding more about the social transmission of behaviour will help us predict how different species may respond to changes in their environment,” said co-author Philippa Brakes, from Whale and Dolphin Conservation and a PhD student at the University of Exeter.

“The rapid spread of socially learnt behaviours can operate much faster than the intergenerational process of natural selection, which can be an advantage or a disadvantage, depending of the type of behaviour transmitted.”

University of St Andrews researcher Dr Luke Rendell, a co-author who specialises on researching whale and dolphin cultural behaviour, said: “Once again we see the power of being able to study cetaceans over extended periods that mean something given their lifespans.

“Dr Bossley’s long-term commitment has afforded us a revealing insight into the potential social role of imitation in dolphin communities.”

The behaviour was tracked using thousands of hours of observation effort by citizen scientists, and its spread suggests a social function for copying in dolphin communities.

The research is published in the Royal Society’s Biology Letters.