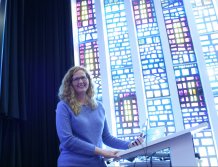 Each year, the Darwin Landing Day Seminar celebrates Charles Darwin’s landing in Falmouth in 1836 after his voyage on HMS Beagle, a journey which changed humanity’s understanding of its place in the universe. Darwin spent much of the five year trip exploring South America and the Galápagos Islands, making careful observations on animals, plants and geology, and collecting thousands of specimens for further study.

Whilst open to all, the seminar is part of the Centre for Ecology and Conservation (CEC) seminar series at the University’s Penryn Campus, which attracts prominent speakers from other prestigious universities.

This year the seminar was presented by Professor Judith Mank, Professor and Canada 150 Research Chair in Evolutionary Genomics at the Department of Zoology, University of British Columbia (UBC). UBC is one of the University of Exeter’s key global strategic partners, and Professor Mank recently hosted a group of academics from the University.

Professor Mank previously held posts at University College London and the University of Oxford. Her honours include a Royal Society Wolfson Merit Award, the Scientific Medal from the Zoological Society of London and a Fellowship at the Wissenschaftskolleg zu Berlin.

Professor Mank's research tests predictions that arise from Darwin’s observations of wide-spread and striking sexual dimorphism across the animal kingdom, which ultimately led to the formulation of his theory of sexual selection. Work from her lab has shown that sexual selection is as important as natural selection in shaping gene and genome evolution and that the genome can rapidly respond to sexual selection, and that this ultimately results in the sex differences that we observe in nature.

David Hosken, Pro-Vice Chancellor of the University of Exeter and Professor of Evolutionary Biology said: “We are honoured to have Judith here to talk about her ground breaking research. To have access to a speaker of Judith’s calibre is quite rare and is thanks to the strong partnership we have with the University of British Columbia.

Professor Mank added: “It’s been a pleasure to talk about my work with people who share my passion for this area of research. I’m very much looking forward to working more closely with the University of Exeter as part of the ongoing collaboration between our two universities.”