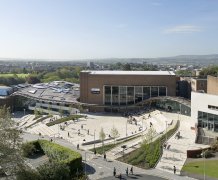 Exeter is now 24th worldwide in the Leiden Ranking, based on the percentage of publications ranked in the top 10% most cited.

The University of Exeter has reinforced its position as being amongst the leading universities worldwide, according to the latest influential global rankings.

The University has also retained its position of 9th in Europe, and 6th in the UK, in the standings.

Both science and humanities subjects have also seen a significant rise in rankings’ subject performance tables.

Both Biomedical and Health Sciences (16th) and Life and Earth Sciences (18th) rose more than 10 places to secure positions in the top 20.

Social Sciences and Humanities moved up six places to 30th, while both Physical Sciences and Engineering (120th) and Maths and Computer Sciences (223rd) remained in similar positions to last year’s table.

Exeter’s rankings are based on the percentage of publications ranked in the top 10% most cited, indicating that the University’s high-quality research has been referenced by other academics in major journals.

Professor Sir Steve Smith, Vice-Chancellor and Chief Executive of the University of Exeter said: “It is a wonderful achievement to experience such a significant rise in the Leiden rankings, and I am thrilled that Exeter has been recognised as being amongst the leading universities both at home and abroad.

“To move towards the top 20, and also see both science and arts subjects perform so well, is testament to the outstanding, high-quality work that is conducted by our academic community on our Exeter and Cornwall campuses.”

The rankings, which are based on Web of Science indexed publications from the period 2014-2017, provide a measurement of the scientific impact and performance of almost 1,000 major universities worldwide and their involvement in scientific collaboration.

Positioning within the rankings is based on the number of citations quoted in highly respected and influential journals.