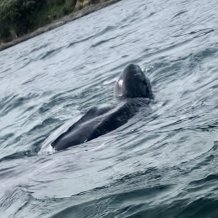 A leatherback turtle has been spotted off the coast of Cornwall – the first confirmed sighting of a live leatherback in UK waters this year.

Scientists from the University of Exeter have asked boat users to be careful to avoid collisions, as the turtles swim slowly and are often found near the surface, and more could be in the area.

James, 14, who spotted and filmed a brief clip of the turtle off Pendennis Point, said: “It was an amazing sight, half the length of our kayak and easily as wide – spotted seconds after a barrel jellyfish.”

Professor Brendan Godley, who leads the Exeter Marine research strategy at the University of Exeter, said: “Leatherbacks are warm-blooded and are known to swim into northern waters, including those of the UK, each summer to eat their preferred prey of jellyfish.

“They are spread all over the Atlantic, so it’s very special to see one as close as James did.

“Coming so close to the shore can lead to problems for turtles, because it can expose them to plastic pollution and the risk of boat strike.

“We would ask boat users to be vigilant, especially if they spot lots of jellyfish in a certain area.”

Professor Godley said this leatherback probably comes from a breeding location in the Caribbean or French Guiana.

Rod Penrose, who runs the UK turtle sightings and stranding scheme, confirmed this is the first live sighting of a leatherback recorded in UK waters this year.

He would welcome any other records of sea turtles in UK waters. Anyone lucky enough to spot one can email him at rodpenrose@strandings.com