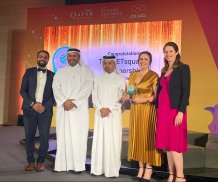 The SETsquared Partnership, a unique enterprise partnership between five leading, research-led UK universities, including the University of Exeter, has been ranked the global number one university business incubator for the third consecutive time by leading research and advisory firm, UBI Global.

The title, which was awarded at last night’s World Incubation Summit in Qatar, continues SETsquared’s ongoing success, having maintained its world-leading position since 2015. This year, the Partnership was commended for demonstrating exceptional value for tech start-ups and the local ecosystem.

With bespoke entrepreneur training programmes and unrivalled access to a network of mentors, alumni, investors, corporate partners and the knowledge base of the five research intensive universities, SETsquared has supported over 4,000 UK high-tech start-ups since its inception, helping them raise more than £1.8bn of investment and creating £8.6 billion of economic impact to date – a figure which is set to rise to nearly £27 billion by 2030.

In the last year alone, more than 50 students, academics and entrepreneurs in Exeter have participated in SETsquared programmes, with member companies raising £33.2 million in investment between them.

The Partnership’s ranking follows the world’s most extensive benchmark study which analyses more than 1,500 incubators and accelerator programmes in 78 countries worldwide. SETsquared scored highly against all 21 key performance indicators (KPIs).

Joe Pearce centre director at SETsquared Exeter, said:“Last night’s result is a fantastic achievement for SETsquared and each of the five universities that make up the Partnership. We are delighted to be ranked number one for the third consecutive year alongside some of the world’s best university business incubators, whose work we admire from afar. Congratulations to everyone involved.”

“This ranking is testament to the dedication of everyone in the SETsquared team and their commitment to the entrepreneurial talent and research and innovation capabilities of the UK. We hope this ranking demonstrates to entrepreneurs, start-ups, and scale-up businesses across Exeter that SETsquared has the experience and track-record to help them succeed and grow.”

Ali Amin, CEO and co-founder at UBI Global, said: “Following a rigorous data-driven approach, we assessed and benchmarked incubation programmes across the world. Our World Benchmark Study 2019-2020 is in tune with the multiple facets of the international incubation ecosystem and illustrates key challenges and opportunities faced by the participating programmes.

“The top lists of programmes were each recognised for outstanding performance in nurturing entrepreneurship and innovation, but SETsquared really stood out amongst its peers. We’d like to extend our congratulations to the whole team for these exceptional results, which really highlight the Partnership’s fantastic contribution to business, innovation and the UK economy.”

SETsquared is an enterprise partnership between the universities of Bath, Bristol, Exeter, Southampton and Surrey which supports technology-based businesses throughout their lifecycle, from idea through to investment and scale-up and develops entrepreneurial thinking for students, academics and businesses.

The partnership between SETsquared Exeter, the University of Exeter and Exeter Science Park plays a pivotal role in helping to develop the next generation of technology businesses in the region. Its tailored support packages are delivered by a team of experienced tech entrepreneurs, professional advisors, mentors and investors, ensuring that founders have access to a wide range of high-level expertise as they progress through the programme.

One of its notable successes is ChargedUp, founded by Hugo Tilmouth and Hakeem Buge when they were at the University and centred on a green portable power bank for mobile phones. Through initial funding secured from SETsquared, they were able to start their first trials, which in turn opened them up to further opportunities for funding from established businesses.

Their ambition is to remove the need for people to own power banks, reducing the demand on the planet’s lithium resources. Customers simply download an app that will direct them to their nearest charging station – be it a shop, hotel, cafe or pub - and scan a QR code to unlock a power bank which they can then take away and return to any of the 1500 stations (and growing) in the network. ChargedUp already works with brands such as M&S, BrewDog, Stonegate, Wework, and O2 and have partnered with green energy supplier Octopus Energy.

UBI Global was founded in 2013 in Stockholm, Sweden to identify where all the innovation hubs are located worldwide and to learn and share what makes them successful. Its World Benchmark Study, this year sponsored by Qatar Development Bank, aims to find common traits and identify best practices amongst these hubs and to help business incubators and accelerators improve their programmes, become more attractive to start ups and increase their overall efficiency.