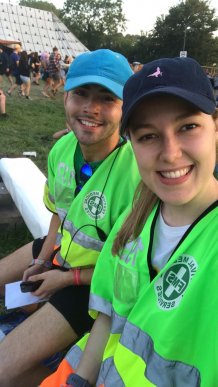 Staff and students from the University of Exeter Medical School treated nearly 5,000 patients at Glastonbury Festival, including a case of mumps.

Students from the Medical School’s Truro campus volunteer at Glastonbury annually as part of the Festival Medical Services (FMS) programme. They complete an intense emergency care training course to prepare them for the extremities of the festival.

The case of mumps arose early in the week when a university student came forward with symptoms.

There is no treatment for mumps, aside from tending to symptoms until the body’s immune system is able to overcome the virus. Because of this, the 20 year old’s weekend was cut short, as they were removed from the festival site, barred from returning.

Professor Ian Fussell, Associate Dean of Education, who led the student group, said: “He was quite upset when we told him he had to leave. He had to be picked up and, once off-site, have his wrist band cut off. It is a shame but necessary for safety of others.”

The mumps virus, an airborne virus which can be spread by an infected person coughing or sharing utensils, causes swelling of salivary glands. Symptoms can include fever, muscle pain and poor appetite.

Glastonbury Festival 2019 saw near-record high temperatures of 27 degrees Celsius, and reportedly hour long queues for drinking water. As a result of the weather, the team treated a significant number of people for dehydration and sunstroke.

Overall the festival’s on-site medical team worked to deliver service to more than 200,000 people. Of the 5,000 the University of Exeter Medical School team treated, only 55 were transferred to hospitals off-site.

Summer Popplestone, a third year Medicine student, said: “The most memorable case for me was a young man who had accidentally overdosed on recreational drugs. My partner and I were the first medical staff on scene, and the patient was completely unresponsive and not breathing properly.

“Thanks to our training we were able to support his breathing and ensure his condition did not worsen while waiting for an urgent ambulance transfer to get him to hospital. I definitely learned a lot that I can take forward into the fourth year of medical school and beyond.”

Niamh Scullion, a third year Medicine student, said: “Volunteering as a first responder at Glastonbury was an incredible experience. Managing patients in loud, busy environments with much less kit than we are used to having in hospital environment was challenging. I have learnt so much from the experience and cannot wait to volunteer with Festival M S again in the future.”

Brian Donnelly, a third year Medicine student, said: "One particular case that stood out for me was when we came across an unconscious patient who had taken a drug and was having an asthma attack. We assessed the patient in a timely manner and found their oxygen saturations to be dangerously low. We monitored the patient's airway and gave them oxygen with a mask. The situation would have been stressful but the trained paramedic I was with encouraged me to use my prior medical knowledge and I received a significant amount of advice and support to handle the situation appropriately. Thankfully, the patient woke up shortly afterwards and her condition was stabilised. She self-discharged.

"I would encourage other students to be part of the first response team as I found the experience to be both valuable and rewarding."