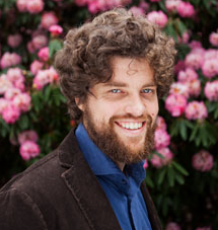 Professor Edze Westra has been awarded the Fleming Prize, now in it's 44th year

A University of Exeter academic has been awarded the prestigious Fleming Prize by the Microbiology Society.

Professor Edze Westra, who is based in the Environment and Sustainability Institute on the Penryn Campus, has been awarded the prize for his work on the molecular mechanisms and evolutionary ecology of CRISPR-Cas systems. CRISPR is an immune system in bacteria that protects against virus infections.

Professor / NERC Independent Research Fellow at the university, Edze Westra said: “I am absolutely delighted to have been selected for the 2020 Fleming Prize, the oldest accolade of the Microbiology Society. It is a huge and unexpected honour to be recognised in this way for my work on the molecular mechanisms and evolutionary ecology of CRISPR-Cas systems. I would like to thank the Microbiology Society for this prestigious award and the University of Exeter for their support during my research trajectory. I also want to acknowledge my talented lab members and collaborators whose dedication, persistence and creativity have formed the foundation for this award.”

Prof Westra studies both molecular aspects of CRISPR-Cas immune systems of bacteria and their evolutionary ecology, in order to understand how these systems work, when they are important and what their consequences are. His early work focused on the mechanism of parasite detection and destruction through the combined action of an immune surveillance complex known as Cascade and a nuclease known as Cas3. His further research has explored how the ecological context determines whether bacteria employ their CRISPR-Cas immune system to resist phage infections or whether they evolve resistance by mutation of the phage receptor on the cell surface. More recently Professor Westra has developed a research program focused on the evolutionary ecology of the wider range of mechanisms encoded by bacteria to resist bacteriophage infections.

His research focuses on understanding if and how bacteria evolve resistance against phages, which are viruses that infect bacteria, and how this depends on the environment. Phages are a promising alternative to conventional antibiotics in the face of the rise in anti-microbial resistance (AMR).

The Fleming Prize is named after Sir Alexander Fleming, founder and first President of the Microbiology Society, then named the Society for General Microbiology (1945–1947) and is awarded to an early career researcher who has achieved an outstanding research record.