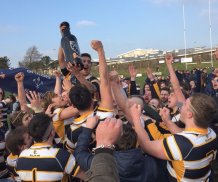 The students emerged victorious at the recent Bottle Match sporting extravaganza - now in its 118th year.

Students raise more than £4,500 for charity, before reclaiming historic trophy.

Students from the Camborne School of Mines sports teams enjoyed a double celebration at the most recent contest of one of the UK's oldest and most historic Varsity match events.

The students, from both the University of Exeter's Penryn Campus and Falmouth University, emerged victorious at the recent Bottle Match sporting extravaganza - now in its 118th year.

And, ahead of the event, the students also raised more than £4,500 for charity Sport In Mind, by being sponsored to be having outlandish haircuts.

The Bottle Match is played between the Camborne School of Mines and the Royal School of Mines (RSM), Imperial College London. The first recorded match between the two sides took place on 16 December 1902, making it the second oldest rugby varsity match in the world.

The Bottle Match started as a rugby union match but as the schools sporting interests diversified other sports began to be played, and is now made up of nine matches across eight sports.

This year also saw the inaugural presentation of The Wardell Armstrong Trophy, which was awarded to the CSM sports teams, as the school which accumulated the most wins over all the matches. Both trophies are displayed at the CSM museum on the Penryn campus which is open to visitors.

The flagship "Bottle Match" - which is contested by the Men's Rugby teams, was secured by CSM, with a tightly-fought 10-7 win.

There were also a host of other successes for sports teams  over the weekend with seven wins, including an incredible 109-2 win for Netball, 21-0 win for Women's Hockey, 28-3 win for Lacrosse, and 12-0 win for Tennis.

Joe Thompson, Chairman of CSM Sports Association said: “The Bottle Match is a huge point in the Penryn Campus calendar, where hundreds of alumni return to Cornwall to see students from all different backgrounds, across both universities, represent this historic mining school. It is an event that all of our athletes work towards and look forward to. The feeling around the clubs around Bottle Match is just amazing, making it one of the best events of the year.”

Joe Rigby, President of CSM Rugby & Student Union President (Exeter) said : “The Bottle Match is the biggest fixture of the year for us as a team, It is an honour for all players involved and competition for positions has been very intense this year. We are very excited to welcome back alumni and past players to celebrate the return of the Bottle to its rightful home.”

Olivia Winter, Lacrosse Chairwoman added: “I’m so incredibly proud of what the club has achieved this last year. Everyone has worked so hard and that was showcased on the pitch. I’m excited to see what the future holds for the club.”

Professor Kip Jeffrey, Head of Camborne School of Mines said: "The Bottle Match event is a wonderful celebration for all involved, and we are proud that the students were able to raise such a significant sum for charity, which was a fantastic achievement alongside a home win. I would express my sincere thanks to the students and Student Union for organising the fixtures and ensuring a successful event. A further thanks go to Komatsu, DGS and Wardell Armstrong for their generous sponsorship and donation."