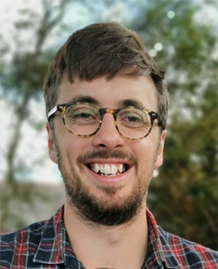 Dr Oliver Allanson from the University of Exeter has been recognised by the Royal Astronomical Society for early career achievements in astronomy.

Dr Allanson, a Senior Research Fellow in Earth & Environmental Sciences, has received the Fowler Prize in Geophysics, in recognition of his noteworthy contributions to his field of research within 10 years of completing his PhD.

The Award was announced by Royal Astronomical Society among the 2023 winners of its awards, medals and prizes, during the January Ordinary Meeting of the RAS, held on Friday January 13th.

Dr Allanson was recognised for the breakthroughs he has made in quasilinear and non-linear physics of wave-particle interactions in the radiation belts.

His work has helped understand the importance of these interactions on high energy radiation belt electrons, as well broaden our understanding of theoretical kinetic physics and astrophysical plasmas – charged particles that are found throughout space.

Dr Allanson has made key contributions through leadership roles, both in the UK’s Magnetosphere, Ionosphere, and Solar-Terrestrial (MIST) community, as well as internationally, including founding the "MIST Awards Taskforce", which operates to address historical imbalances in the diversity of both national and international scientific awards.

Dr Allanson said: 'I am deeply honoured to receive this award, and full of gratitude. It is a massive pleasure to be able to do the work that I do for a living, with the wonderful colleagues that I have in the UK MIST community, and also internationally.

"To also hear that those colleagues value this contribution is very special indeed, and I would like to thank all of my mentors, from school through to university and now my research community."

Dr Allanson’s research centres around electrically charged particles, plasmas, that permeate space. This plasma can be accelerated close to the speed of light via so-called 'resonant interactions' with radio waves, themselves naturally generated in space.

The regions of the Earth's magnetosphere that contains these high energy particles - which comprises the magnetic field and plasma surrounding our home planets - are known as the radiation belts. Operational satellites orbiting the Earth often traverse this hazardous radiation environment.

Highly energetic particles pose many operational and financial risks to orbiting spacecraft, including total loss. These risks, and other associated ground-based effects, have led to the inclusion of Space Weather in the UK Cabinet Office National Risk Register of Civil Emergences.

Numerous Space Weather forecasting models exist around the world, but none of them include these effects. The British Antarctic Survey hosts one world leading model, which is to be licenced to the UK Met Office.

Dr Allanson’s Fellowship focuses on improving forecasting accuracy of this operational model by understanding and including these effects – crucial as we become more and more dependent on satellite technologies.

Speaking about the awards Professor Mike Edmunds, President of the Royal Astronomical Society, said: "One of the best parts of my role as President is celebrating the remarkable talent in the astronomy and geophysics community. Our medals and awards honour the very best people in our sciences, marking both those with extraordinary promise at the start of their careers and those who have shaped our understanding of the Earth and the cosmos over decades. My congratulations to everyone."