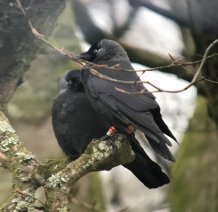 Male jackdaws don't stick around to console their mate after a traumatic experience, new research shows.

Jackdaws usually mate for life and, when breeding, females stay at the nest with eggs while males gather food.

Rival males sometimes visit the nest and attack the lone female, attempting to mate by force.

In the new study, University of Exeter researchers expected males to console their partner after these incidents by staying close and engaging in social behaviours like preening their partner’s feathers.

However, males focussed on their own safety – they still brought food to the nest, but they visited less often and spent less time with the female.

"Humans often console friends or family in distress, but it's unclear whether animals do this in the wild," said Beki Hooper, of the Centre for Ecology and Conservation on Exeter's Penryn Campus in Cornwall.

"Previous studies have found consolation-like behaviour in some animals, but there is often another explanation – other than consolation – that could motivate this.

"We designed this study to rule out other explanations, so we could find out whether jackdaws, which have complex social lives and life-long partnerships, would console each other.

"We found that male jackdaws could detect their partner’s distress, but did not console them.

"The decreased time males spent in the nest after an attack may be for self-preservation, where they respond to distress in their partner by avoiding the nest, a potential place of danger.

"Further work is needed to figure out why exactly males responded as they did, though."

The research team used both experimental nest "visits" of rival males – playing the sounds of an approaching male to a female alone at the nest – and recordings of males attacking nesting females in the wild.

Females became agitated after such experiences, and their returning mates clearly sensed this as their behaviour changed – decreasing "affiliative" behaviour and visiting the nest less regularly afterwards.

"Jackdaw pairs depend on each other for survival and reproduction, so based on current theory we would expect to see consolation after a traumatic event," said Dr Alex Thornton.

"The absence of consolation is striking, and it challenges common conceptions about where consolation should evolve.

"It also chimes with concerns that current theory may be influenced by anthropomorphic (attributing human characteristics to animals) expectations of how social relationships work.

"To properly understand such social behaviour among animals, we need to take account of the dangers and trade-offs they face in the wild."

Jackdaws are an extremely sociable and intelligent corvid species, with a similar number of neurons in their brains to nonhuman primates.

They show impressive levels of social intelligence, such as individual human recognition, and the ability to socially learn from group members about dangerous people.

The paper, published in the journal Royal Society Open Science, is entitled: "Wild jackdaws respond to their partner’s distress, but not with consolation."