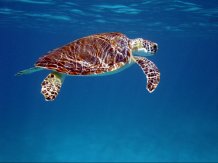 Researchers and conservationists who have been tracking turtle migration for over a decade believe a new study highlights the need for investment and conservation of vital marine habitats which play a key role in turtle’s formative years.

The study has found that sub-adult green turtles in the UK Overseas Territory of the Turks and Caicos Islands will stay within a Marine Protected Area (MPA) while they are growing, but as they near maturity will migrate hundreds of miles across the Caribbean to search out adult feeding grounds.

The research, conducted by the Marine Conservation Society, the University of Exeter, the Turks and Caicos Islands Government’s Department of Environment and Coastal Resources (DECR), and other partners including the Amanyara Resort, used flipper tags and satellite transmitters to reveal the movements of sub-adult, or teenage, turtles.

Between 2002 and 2017 researchers, working with local fishermen, flipper-tagged 623 green turtles and fitted 16 larger teenage turtles with satellite transmitter tags on the top of their shells. The tagged turtles were released where they were captured on remote and pristine seagrass beds within the North, Middle, and East Caicos Nature Reserve MPA.

Two of the migrating turtles headed west to Cuba, one headed north to the South-East USA and the high seas, and another headed south to Central America.

This turtle eventually settled at feeding habitat on the Colombia coast some 900 miles from the Turks and Caicos Islands after having swum through the territorial waters of eight Caribbean countries.

Four of the flipper-tagged turtles were captured years after release by fishermen in Nicaragua’s waters, and another was caught in Venezuela’s coastal waters.

Dr Peter Richardson, Head of Ocean Recovery at the Marine Conservation Society and project lead, said: “This exciting, collaborative research shows how important this MPA is for green turtle populations in the Caribbean region.

"These turtles are feeding and growing up on the seagrass beds at this one relatively small site for years, and then travelling to countries throughout the region to live the rest of their lives.

"Turtles from around the region really depend on these key habitats.

"They have shown us why we should invest resources in protecting these special, wild and pristine places in our UK Overseas Territories now and for generations to come.”

Dr Phil Doherty, of the University of Exeter and lead author, said: "This study shows the value of tracking and monitoring techniques which allow us to follow animals across distance from areas where they grow during early life, to adult foraging and breeding areas.

"This work not only highlights the importance of the Turks and Caicos Islands Marine Protected Area network, but also reveals the connectivity of turtle populations throughout the region.

"There is a real need for regional cooperation to support effective sea turtle conservation."

Lormeka Williams, Director of DECR, said:“The results of the study have shown a continued value of marine turtles in the Turks and Caicos Islands, as well as the importance of the MPA for the various life stages of turtles.

"It is important for the TCI and the entire region to be aware of the connectivity of the turtle species and how management measures can and do impact the species.”

The research was generously funded by several private individuals, many who were guests at the Amanyara Resort, which also supported the study, along with UK wildlife charity People’s Trust for Endangered Species, Princess Yachts, Big Blue Unlimited and the National Marine Aquarium, Plymouth, United Kingdom.

The analysis was funded by a NERC Knowledge Exchange Fellowship.

Nida Al-Fulaij, from People’s Trust for Endangered Species (PTES), added: “Research like this contributes hugely to the long-term survival of a species.

"PTES is extremely proud to have supported this research.

"Comparing and contrasting the movement of so many different individual turtles in the same region provides really detailed insights into the ecology of a species that is not easy to study, so this is very welcome news for turtles in the Caribbean.”

The paper, entitled “Spatial Ecology of Sub-Adult Green Turtles in Coastal Waters of the Turks and Caicos Islands: Implications for Conservation Management” is an open-access article and can be accessed here: https://doi.org/10.3389/fmars.2020.00690