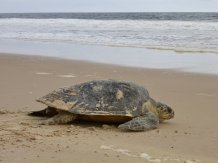 A Sea Turtle on the beach. Photo Credit: Kristian Metcalfe

The true extent of how successful conservation efforts to protect sea turtle populations along the western coast of Central Africa have been revealed in a new study.

The research team, including the University of Exeter, has studied the long-term population trends for olive ridley and leatherback turtles nesting in the Republic of the Congo.

The new study, which uses sophisticated modelling, together with previously unpublished data collected by several organisations including Renatura Congo and the Wildlife Conservation Society, provides the first long-term analysis of how the numbers of these two species of sea turtles have changed over the last two decades.

The results suggest that the abundance of nests for olive ridley turtles has showed signs of a steady increase in recent years.

However, for leatherback turtles, the pattern is more cyclical, with periods of high and low nesting numbers identified.

The Republic of the Congo’s single marine national park plays a key role as it provides protection for more than half of olive ridley and leatherback turtle nests in the country.

Dr Lucy Omeyer, a post-doctoral research associate at the University of Exeter said: “The results highlight both the regional and global importance of the Republic of the Congo for sea turtles, hosting the second largest documented populations of olive ridley and the third largest for leatherback turtles in Central Africa.”

Sea turtles have lived in the oceans for more than 100 million years, yet they have faced an unprecedented array of threats – from the illegal take of turtles, bycatch (accidental catching) and loss of nesting and foraging habitats through urban expansion, climate change, and pollution.

Global conversation efforts to protect sea turtle populations on land and at sea, however, have allowed numerous populations to recover, as shown by new study.

Nathalie Mianseko, director and founder of the NGO Renatura Congo, said: “We have been working tirelessly for more than 15 years to protect sea turtles in the Republic of Congo.

“Illegal take of females and their eggs during the nesting season has significantly been reduced thanks to beach patrols and environmental educational campaigns aimed at both children and adults.

“Alongside protection on land, we have also developed a bycatch release programme, which successfully contributed to over 18,000 turtles incidentally caught in fishing nets being returned to the sea since 2005”.

The researchers say that, while the results highlight the Republic of the Congo’s significant efforts to provide protection to sea turtles, there is scope for further protection along the Atlantic coast of Africa.

The sophisticated modelling used in this study will also be particularly valuable to conduct similar studies elsewhere to uncover trends in sea turtle numbers when data are missing.