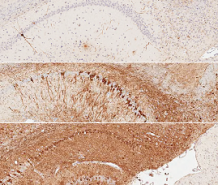 The team analysed the build-up of each protein in the brain and the expression of genes associated with them.

New research has shed fresh light on how the build-up of two proteins in the brain might affect the activity of genes involved in Alzheimer’s disease.

Researchers at the University of Exeter worked in collaboration with Eli Lilly and Company to examine the brains of mice carrying mutations in the genes for the proteins amyloid and tau. The build-up of both proteins in specific regions of the brain is known to play a role in Alzheimer’s disease.

In a paper published today in Cell Reports, the researchers found evidence that the levels of gene activity changed dramatically as tau and amyloid accumulated in the brain. The team, funded by Alzheimer’s Research UK and Alzheimer’s Society, observed significant changes in the levels of genes involved in inflammation in the immune system, which became more active as tau levels increased. The research also highlights new pathways potentially involved in the progression of Alzheimer’s disease, and adds weight to theories that brain inflammation is a key component in the build-up of tau.

First author Dr Isabel Castanho, of the University of Exeter, said: “Our results suggest that the genes which are disrupted through the build-up of tau and amyloid in the entorhinal cortex region of the brain influence the function of the immune response in the brain, which is known to be a key component of Alzheimer’s disease.”

The team analysed the build-up of each protein in the brain and the expression of genes associated with them as the mutant mice got older. They observed a build-up of both tau and amyloid, with these changes associated with widespread changes in gene expression – particularly in the case of tau. This is interesting because it suggests that the accumulation of tau might have more dramatic effects on gene regulation in the brain than amyloid. Furthermore, a number of the identified genes are known risk factors for Alzheimer’s disease, and overall the changes observed in mice mirror those seen in human Alzheimer’s disease brains.

Professor Jonathan Mill, of the University of Exeter Medical School, who led the project said: “Currently, no treatments are available that can change the course of Alzheimer’s disease. Understanding the interaction between genes and progression of the disease will help us identify new targets for treatment, which we hope will one day lead to drugs that can effectively treat this terrible disease.”

Dr Sara Imarisio, Head of Research at Alzheimer’s Research UK said: “Genetics plays an important role in the development diseases like Alzheimer’s and teasing apart the processes contributing to disease is crucial in the hunt for new breakthroughs, which will change lives. Future research capitalising on genetic findings like this is a top priority for dementia researchers around the world. It’s only thanks to the generosity of our supporters that Alzheimer’s Research UK is able to fund vital dementia research like this.”

Dr James Pickett, Head of Research at Alzheimer’s Society, said: “We’re proud to be funding research like this which plugs gaps in our knowledge about Alzheimer’s disease, and lays strong foundations for the development of new lifesaving treatments. Through research we will beat dementia. We owe it to the 850,000 people in the UK currently living with dementia to understand the condition better and find a cure.”

The full paper is entitled ‘Transcriptional signatures of tau and amyloid neuropathology’.