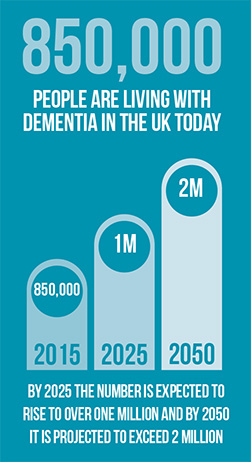 Our outstanding research is closing a recognised gap in translating basic research and new discoveries into commercially viable treatments that can make a real difference to health outcomes. We focus on the two key areas of translating discoveries into effective treatment and repositioning existing drugs, bringing them into clinical practice.

In dementia, many people are over-medicated for distressing symptoms such as pain, anxiety, behavioural issues and psychosis. Widely-used medications can have devastating side-effects. Psychosis medications can quadruple chances of stroke or death in people with Parkinson’s dementia.

Our research is discovering effective alternatives that reduce the symptoms without the side effects. Using the PROTECT platform, with more than 20,000 healthy people over 50 signed up online, we run a series of trials simultaneously on the factors that help people stay mentally healthy in later life.

We accelerate promising new therapies to bring them forward to large-scale cohorts and robust clinical trials. As well as analysing the efficacy of new drugs, we research existing drugs that can be “repositioned” – or repurposed for other uses for which they are effective. As these drugs are known to be safe, it reduces time and cost, meaning they can make a meaningful difference to people’s lives as swiftly as possible.