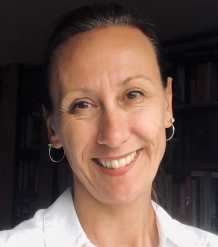 Kirsten is the Project Manager for The Inclusivity Project, an ERDF-funded business support project focusing on workplace inclusion, diversity and wellbeing. She joined the project in September 2020, initially as a Knowledge Exchange Officer.

This is Kirsten’s third ERDF project and previously worked as Creative UK’s Project Manager on the EPIC (E-health Productivity in Cornwall) project and as University of Plymouth’s Project Manager on the Cultivator programme. She has had a varied and interesting career, having left Cornwall in her teens to study and work in London, which saw her spend a few years in the television industry (including as Michael Palin’s PA) before accidentally moving into the world of headhunting.

Returning to Cornwall in 2004, Kirsten founded a literary festival in her hometown of Falmouth and also ran the Cornwall office of one of the Prince's Charities, the sadly now defunct Arts & Business.

Working on The Inclusivity Project unexpectedly sparked a keen interest and she is currently studying part-time for an MSc in Workplace Health and Wellbeing at the University of Nottingham.

When she is not working or studying you can usually find Kirsten gig rowing or pottering in the garden.