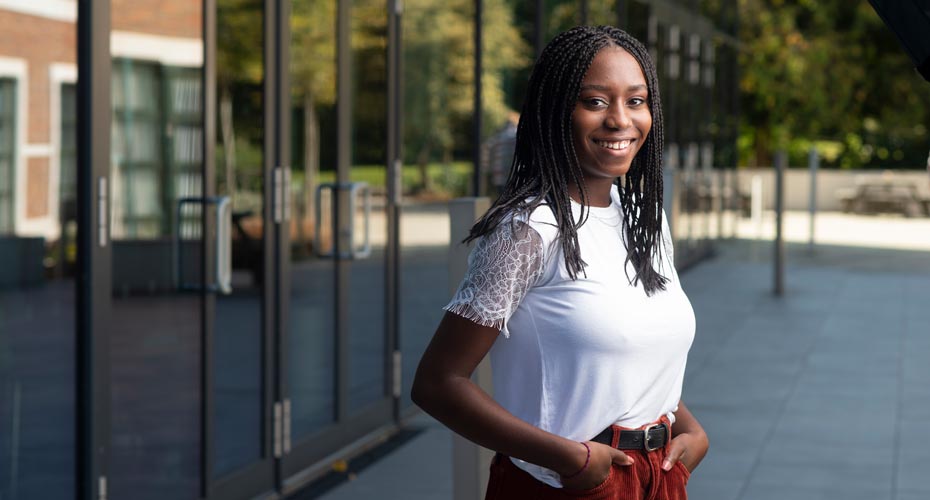 Lara is studying Business and Management and is from London. She felt the pressure at school of achieving good grades, but realised that comparing herself to others was not beneficial, and instead focused on working hard in her exams.

My main challenge for getting into university, as clichéd as it sounds, was myself. I went to schools where everyone had very high academic achievements, and I believed I couldn’t do as well as my peers. It wasn’t until sixth form that I decided just to work hard and ignore those around me, as it wasn’t beneficial to compare myself.

Exeter was the last university I visited, and I immediately knew I liked it. There was such a buzz and it was by far the most beautiful campus I had seen. I could just see myself in that environment, and wanted to be a part of the community. Something that really stuck with me was a Professor saying ‘We don’t care whether you’re taking dance (which I was), art or music, as these aren’t any less important than maths and sciences. We want to celebrate what you’re good at, not punish you for what you’re not’. I felt like I wasn’t going to be excluded for my eclectic mix of A-level subjects, and that I will still be able to succeed on the course with the qualifications I had.

I really enjoyed my first year at the University of Exeter. I love the fact that I was able to tailor my degree to my interests through my optional modules, and my personal tutor has been on hand to give me general advice, support and motivation when I need it. It’s always nice to have a friendly face to go to. I’ve also enjoyed the social aspect of university. It’s nice to be surrounded by others who also have the same attitude to immersing themselves in university life.

You hear a lot about what to expect of university from all different mediums. But university is so different for everyone and it is what you make it, so go in with an open mind.