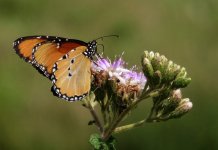 It is a spectacular butterfly breed with an intriguing back story – now scientists have revealed how male-killing bacteria are helping to create a dazzling hybrid of the African monarch.

Researchers have shed new light on the complex reproductive process which dictates that only female offspring of the Danaus chrysippus survive – all in close proximity to Kenya’s capital, Nairobi.

Previous research had shown that all female butterflies in this region are infected with a bacteria, called Spiroplasma, and after the females mate with immigrant males from other subspecies, the bacteria kills all their sons.

The findings reveal that the bacteria ensures the survival of one particular colour pattern gene, one that is always passed from mother to daughter. However, this same gene causes the daughter to resemble her father, rather than her mother.

Scientists say that by forcing its way into daughters only, the colour gene genetically hitchhikes with the bacteria to evade death.

“This infection sets up a strange situation in this butterfly where populations in East Africa are largely female and they rely on immigrant males for their propagation,” said Professor Richard ffrench-Constant, of the Centre for Ecology and Conservation on the University of Exeter’s Penryn Campus in Cornwall.

“These males have no sons and all their daughters appear identical to them.”

Despite 50 years of study, scientists have, until now, been puzzled why this female-only population displays unique and dazzling colour patterns – that change seasonally.

Normally, each subspecies has a recognisable colour pattern that warns predators that they are toxic. New and unusual colour patterns are thought to make them more vulnerable to predators.

By sequencing the DNA, researchers proved that this new fused chromosome, called the neo-W, alters colour patterns and spreads rapidly through the population, hand-in-hand with the male-killing bacteria.

There was, however, one puzzle for the scientists still to solve: if the females all carried the same colour gene, why was the population so variable?

The study found that these genes in the daughters allow themselves to be overridden by the genes coming from the fathers.

Seasonal fluctuations in wind patterns are thought to affect which subspecies of male immigrants end up in this region, leading to changes in the females’ colour patterns.

Even though they always resemble their father, the infected hybrid daughters, unable to produce sons, represent a genetic dead end for fathers, whose colour pattern genes only survive for one generation before being wiped out.

Dr Simon Martin, of the School of Biological Sciences at the University of Edinburgh, said: "The relatively fast emergence and spread of a new chromosome, combined with the short life cycle of the butterfly, allows us to study how the microbe is altering the evolution of the butterfly, almost in real-time.

"We are continually discovering new ways in which microbes manipulate their hosts, and male-killing is just one example of this.

“It makes you wonder to what extent the evolution of other organisms – even humans – is affected by such unseen forces."

The study, published in the journal PLOS Biology, was carried out in partnership with the Universities of Exeter, Cambridge and the Mpala Research Centre in Kenya.

The study was funded by the European Research Council’s European Union Horizon 2020 research and innovation programme, The National Geographic Society and through a Royal Society University Research Fellowship, awarded to Dr Martin.