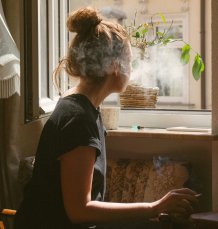 Data shows that 32 percent of current and former smokers aged 16–24 in the UK started when they were 16 or 17 years old.

A complex array of smoking behaviours and identities among young adults explains why public health initiatives around smoking prevention and cessation are not working for this age group, according to latest research led by Dr Ria Poole at the University of Exeter.

Legislation has been a key driver to reducing smoking uptake (in the UK the minimum age to purchase tobacco was raised from 16 to 18 in 2007), but there are still many young adults who start and continue to smoke. In the UK, data shows that 32 percent of current and former smokers aged 16–24 started when they were 16 or 17 years old, during the turbulent years of transitioning from youth into young adulthood.

Dr Ria Poole conducted a meta-ethnography to understand how young adults construct and negotiate their identities in the context of smoking and why they transition into and out of smoking regularly.

Her study found that many young adults reported smoking more when drinking alcohol and to facilitate new relationships, peer interaction and increase social status. For those with already stigmatised identities (Black women, women of colour and LGBTQ+ people) tobacco was used as a coping mechanism to deal with stress and as an act of resistance. She also found that unrealistic self-management attitudes and behaviours led to smoking initiation and maintenance due to young adults’ not identifying with addiction and anticipating that they would be able to quit in the future using willpower alone.

Dr Ria Poole said, “Public health messaging around smoking prevention and smoking cessation presents a binary that doesn’t resonate with or serve the majority of young adults – it hasn’t worked. Many young adults don’t see themselves as smokers, and are unable to realise that they are addicted and how difficult it will be to quit without support and repeated attempts.”

“Also, many young adults are not ready to quit smoking – they see themselves as being too young to have health concerns and their reality is that smoking supports their social interactions and identities. In light of this new evidence, new public health interventions should be developed specifically for this under-served age group that speaks to their identities, lifestyles and where they are at in terms of their personal development.”

“By taking a harm reduction approach and using creative techniques and platforms such as social media to engage young adults in the conversation around tobacco, we can increase awareness and momentum around the issue and help make smoking a trend of the past. The UK is moving towards a “Smokefree 2030” so this research presents timely support for this.”

The research paper, published in Substance Abuse Treatment, Prevention, and Policy, can be accessed here.