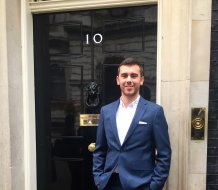 Luke outside No.10 Downing Street

An Exeter student is considering exploring a new career path, following an inspiring week at the Commonwealth Youth Forum, held during the recent Commonwealth Heads of Government Meeting.

Luke Oliver, who studies Drama with Spanish, was a member of the Task Force of volunteers helping run the Youth Forum. He was responsible for the group’s communications, including social media. The Youth Forum was one of four made up of people from across the Commonwealth; the others were Women, Business and People’s. Each forum debated current issues surrounding four key pillars – prosperity, fairness, sustainability and security. The proposals and policy ideas which came from each forum were then fed through to the Commonwealth government heads to consider.

Luke was impressed at how the issues debated were able to be taken forward:

“The power of the Commonwealth is with the people – the grassroots activist, the service providers lobbying for change,” he said. “It’s the role of the Heads of Government to listen to them and create legislation to enable them to develop and deliver their work.”

As a result of his experience, second-year Luke is now considering other options after graduation, including whether to pursue a career within government.

During the London event, Luke met the UK Prime Minister, Teresa May and also members of the Royal family, including Prince Harry and his fiancée, Meghan Markle.
“It was an incredible, incredible experience and when applications open to attend the next event in Rwanda, I will be applying,” he said.