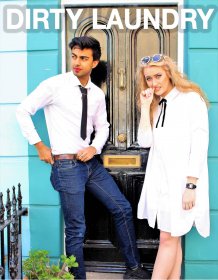 Amy will be starring in Dirty Laundry at the Edinburgh Fringe alongside her friend Aniket Bharadwaj.

An English student from the University of Exeter’s Penryn Campus has written and will star in a play at the Edinburgh Fringe festival this August.

Michael, the straight, cisgender man enjoys wearing dresses from time to time, something which doesn’t match the toxic masculine ideologies instilled by his father. The story focuses on Michael going public and airing what he feels is his ‘dirty laundry’. The message of the play being a woman can wear trousers, a shirt or a tie without a social quest for a label, but a man in a skirt is considered to be making a statement.

Discussing her inspirations for the play, Amy Matthews said: “I think the consensus is that we have a voice and our clothes are mute, and I firmly believe it to be the other way round when it comes to passing judgement. We are heading in the right direction in changing that, but my fear is that these discussions are all too often confined to seminar rooms - its percolation to the guy in the pub is barely a drip-feed. I thought this would be a good platform to vocalise all of these things in a good-humoured, plain English, contextualised way for a mixed audience”.

Amy was influenced by her time studying at the Penryn Campus, where she was encouraged to be tolerant, open-minded, curious and informed. She was able to discuss and learn about gender performance, gender equality and class division informing, which has inspired her writing.

Talking about her time at the University of Exeter, Amy said: “All of my modules here have promoted discussion around gender and equality, owing to its being a ubiquitous, interdisciplinary issue. It also helps that I have been exposed to so many opportunities by my tutors and the University as a whole, that I've become much less cautious of taking them. It has offered an opportunity to ask literary powerhouses for advice - the likes of Max Porter, Natasha Trethewey, Paula Meehan to name a handful. Meeting the human behind the name printed on the front covers has affirmed the fact that people from all walks of life have something to offer, and can ultimately, be successful.”

Amy will be starring in Dirty Laundry at the Edinburgh Fringe from 3-13 August alongside her friend and UCL student Aniket Bharadwaj.

For more information and to book tickets, visit edfringe.com