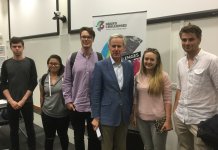 Eamonn Butler, Director of the Adam Smith Institute and biographer of Adam Smith, was guest speaker during the event, organised with the University’s Economics Society and the Freedom Society.

The talk was a preliminary event for students considering the ‘Business of Brexit’ challenge, part of the Grand Challenges programme, during which students carry out group research supported by leading academics and external specialists to offer ideas and insights on contemporary issues.

Eamonn Butler reminded his audience that Adam Smith’s “An Inquiry into the Nature and Causes of the Wealth of Nations”, first published in 1776, was written in very different times when tradesmen could not cross borders and lending at interest was against the law in some places, but he argued that some of Smith’s views would have supported Brexit to achieve what was needed for nations to prosper, peace, easy taxes and the tolerable administration of justice.

Though the Adam Smith Institute did not take a position during the Brexit referendum, Dr Butler, who had campaigned for membership in 1975, said his views had changed over the years and that he now considered that Brexit would leave the UK in a better position to trade with Europe and the rest of the world, as well as face the challenges of the future. The EU’s record in trade deals, complexity of self-interested regulation, taxation and contributions to international security were all things that Adam Smith would probably have challenged as restrictive.

Professor John Maloney, Associate Professor of Economics and academic lead for the Business of Brexit Challenge, said: “There are a lot of contemporary views about Brexit but Eamonn Butler’s talk framed Brexit through a different lens. By looking at it in relation to an 18th-century perspective that still provokes discussion today he signposted some of the opportunities that could follow from leaving the EU”.

Grand Challenges is an interdisciplinary, enquiry led learning experience which improves student employability. Grand Challenges Week takes place 5-9 June in Streatham, and 12-16 June in Penryn. The Business of Brexit is one of the themes on offer this year; others include Climate Change, Food for Thought, Mental Health and Global Security.

The event was organised in conjunction with the Economics Society and the Freedom Society.