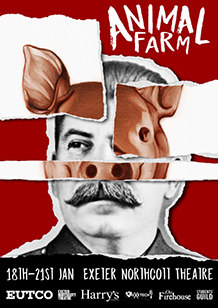 The Exeter University Theatre Company will perform this unique production of Animal Farm at the Northcott Theatre from 18 to 21 January.

Exeter school children and teachers are to be offered cut-price tickets to a University production of George Orwell’s Animal Farm, which features on this year’s GCSE syllabus.

Puppetry, physical theatre and original live music will bring this classic novel to life in a unique student production, performed at Northcott Theatre from 18 to 21 January.

Students of the Exeter University Theatre Company (EUTCo) will transform the tale of Animal Farm into a theatrical drama in what promises to be an exciting, energetic and creative adaptation of Orwell’s famous political satire.

The play’s narrator, a student revising the novel for his exams, quickly becomes absorbed by the action of the animal rebellion and finds himself lost in the story of a revolution that went wrong.

By adapting Peter Hall’s script and drawing influence from directors such as Sally Cookson, Abigail Clarke, 20, a third-year drama student at the University of Exeter, has directed this unique production.

Abigail, said: “Animal Farm has been one of the most challenging but exciting projects I’ve ever worked on. The whole company has created something truly spectacular.

"Given that it features on the GCSE syllabus this year we are really keen to get local schools to come along and see the novel they have been working on come to life. With endless energy, this production is original and not one to miss!”

As Animal Farm features on this year’s GCSE syllabus, EUTCo have produced the play with students in mind, and encourage schools to attend with an offer of £5 tickets for groups of 15+ (a £3 reduction) and free admittance for teachers.

One of the more distinctive elements of this adaptation is the use of puppetry. EUTCo have handcrafted a myriad of life-sized puppets to represent the animals of the story.

In preparation, the cast attended a workshop run by Steve Tiplady, a renowned puppet director for the Royal Shakespeare Company whose credits include A Midsummer Night’s Dream, Pinocchio, The Lion, the Witch and the Wardrobe and an episode of The Mighty Boosh.

Laura Jackson, a drama student, in the ensemble said: “I’ve really enjoyed working with the puppets and learning how much life you can create through what is essentially a dead object. The workshop with Steve was great, it really highlighted some techniques we hadn’t thought of and it has helped us bring a whole new energy to the show.”

In order to raise the funds for the Animal Farm production, EUTCo ran an online Crowdfunder. In 28 days they successfully raised £1,900. In addition, they gained £400 through bake sales and a pub quiz.

The company also received £1,000 from the University’s Annual Fund which aims to support projects which enhance student experience using philanthropic support from alumni, parents, staff and friends of the University.

EUTCo is the largest and longest running theatre company at the University. They perform annually at the Northcott Theatre, one of the largest arts venues in the southwest, and consistently receive positive reviews with last year’s Angels in America being described by a local critic as ‘resonant and powerful’.

Tasmin Keeley, a drama student in the ensemble said: “People should come and see Animal Farm because it’s going to be a really unique and interesting show. I think the way the set is used is so different to what is normally on at the Northcott and what EUTCo have done in the past.”

To book tickets for Animal Farm, visit the Northcott Theatre website. For more information and to see examples of their previous work, visit the EUTCo website.