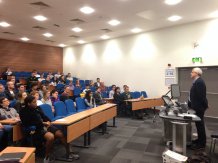 Economist and former cabinet minister Chris Huhne spoke about how businesses can plan for the challenges Brexit will bring during an event with University of Exeter staff and students.

Mr Huhne, who served in the coalition Government, addressed undergraduates as part of the University’s Grand Challenges programme, where, supported by leading academics and external specialists, they carry out group research in order to create a solution to global issues.

The former Secretary of State for Energy and Climate Change contributed to the ‘Business of Brexit’ Challenge.

Mr Huhne argued the UK shouldn’t be leaving the EU at all and said the biggest challenge for businesses would be to cope with barriers such as costly paperwork to be able to still trade with European Union countries. He said the “gravity model” – the theory that the amount of trade between two countries is inverse to their distance - continued to hold at least for the time being. This is a challenge to businesses hoping to cash in on free trade deals with far-off countries in compensation for more difficult access to Europe.

Mr Huhne said the loss in national income due to the fall in the pound since the Brexit vote was greater than the cost of implementing the recommendations of the Stern report on climate change.

In answer to questions, he was pessimistic about passporting arrangements for the City of London, but refused to condemn the government unequivocally for resisting a parliamentary vote on Brexit when the terms of leaving had been negotiated.

Professor John Maloney, Associate Professor of Economics and academic lead for the Business of Brexit Challenge, said: “I hope Chris Huhne’s talk will bring more students into the Brexit challenge because if there was one thing he established, it’s that it is certainly a challenge.”

Unique to Exeter, Grand Challenges is an interdisciplinary, enquiry led learning experience which improves student employability. During Grand Challenges Week, 5-9 June in Streatham, and 12-16 June in Penryn, students choose from a range of global issues and, supported by leading academics and external specialists, carry out group research in order to create a solution to their challenge.

The Business of Brexit is one of the themes on offer this year, others include Climate Change, Food for Thought, Mental Health and Global Security.

The event was organised in conjunction with the Economics Society.