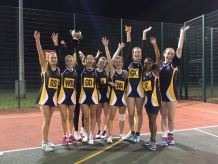 Last weekend ten of Falmouth and Exeter Students’ Union’s (FXU) sports team headed up to London to compete in the annual Bottle Match; the biggest sporting weekend of the academic year.

Elena Pemberton, CSM Netball President: "It’s an amazing score for CSM Netball and it was great to be able to retain the trophy, having not been able to play last year."

Ahead of the Bottle Match, the CSM Rugby team were subjected to a series of weird and wonderful hair dos to raise money for Rugby For Heroes. Their final total reached over £1,200.

Nick Pearce, CSMSA Sports Officer and event organiser: “It was a passionate weekend of sport from both sides. Although the end result was not the one we intended each team fought until the last second and goes to  show how much this tradition means to the CSM teams. I am proud to be a part of it.”

Last weekend also saw students go to the BUCS Nationals in Sheffield, which had over 6,000 students across Britain compete. The Athletics team competed in their first national competition to great success, with lifetime and personal bests. Meg Bailey also went on to reach the women's Pole Vault final, placing 15th in the UK for her age range.

Two individuals competed in Fencing too, one of which, Menna Dief, is an FXU Sports Bursary student. She currently ranks ninth out of 70.  The Sports Bursary Scheme supports students of outstanding sporting ability who show evidence of achievement at national level and above.

Back in Cornwall, both Sunday Football teams won, with FXUnion beating Shortlanesend 7-1 and Tremough FC beating Union 5-1. The teams currently sit joint top of the league.

Amanda Chetwynd-Cowieson, FXU President Student Experience: “It's fair to say FXU students have had an unbelievably successful weekend of sport - both on a local and national level! Bottle Match is always such a fantastic weekend for players and spectators, so despite the final result FXU are really proud of all the hard work each and every CSM team and player has put in this season. To also have students representing FXU at BUCS Nationals for the first time in such numbers with such impressive performances is a real testament to the hard work those athletes have put in this year! FXU’s Athletics clubs also earned some personal bests, with Jamal Clarke, Megan Bailey and Jordan Clay setting new club records.”