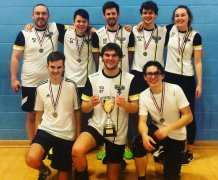 FXU sports clubs have winning start to the term

Falmouth and Exeter Students’ Union (FXU) is home to 50 different sports clubs, many of whom have recently contributed to an overflowing trophy cabinet.

Ryan Borley, Club President: “It was a huge confidence boost to reach the final of our first ever tournament. We were guaranteed our first silverware and would have been happy however the final ended. We couldn’t be happier with how our first tournament went and can’t wait for the next one. ”

Despite a cold and wet weekend, the students’ union’s Quidditch team, Falmouth Falcons, also competed in a tournament, hosted by Derby. They placed third in the Compass Cup, after losing to York and Bangor, both by 100-40, and winning their rematch with Liverpool 60-20.

Gavin Hughes, Club Vice-President: "This year has been about rebuilding the club having lost a lot of our old guard over the past year or two, and we came into this tournament hoping to prove that we were still a force to be reckoned with. By coming in third behind Bangor and York, two teams very much in ascendancy at the moment, and making both teams fight to a bitter end for victories against us, I think we’ve demonstrated that the Falmouth Falcons are here to stay. I’m proud of every one of our players, especially those for whom the Compass Cup was their competitive debut."

In addition to wins and tournaments, FXU’s sports clubs have continued to raise money for charity, with the CSM Netball team hosting a mixed netball tournament. 11 teams competed and raised more than £200 for Cancer Research UK, England Netball’s chosen charity. 28 matches were played over the course of Saturday afternoon, with the unbeaten The Team Who Needs No Introduction beating Truro Medics 9-1 in the final.

Elena Pemberton, President: “The tournament was a huge success. It was amazing to see so many new faces and raise money for a great cause! We’ve had a great start to the term, with wins for the first and second teams. Bring on Bottle Match.”

The Netball team are currently celebrating another great success, having recently ranked the highest-performing sports club at the students’ union. FXU’s sports clubs are regularly reviewed and given an accreditation score, with netball scoring the highest in the latest round.

Hayley Curtis, FXU Sports Manager: “I’m so proud of what the sports clubs have achieved. It’s fantastic to see so many students competing outside of the local area and also being so active within the local community.”