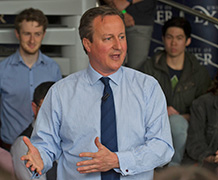 David Cameron speaking to students and young people at the University of Exeter.

Students questioned Prime Minister David Cameron during his visit to the University of Exeter to launch a new campaign to encourage young people to vote in the forthcoming EU referendum.

Mr Cameron used his visit to the Streatham campus to urge students to use their vote in June to support the EU. He also launched the 'Brighter Future IN' ground campaign by Britain Stronger In Europe.

The Prime Minister answered questions from students on what an exit from the EU would mean for universities, how the EU helps young people and rural communities and businesses and what steps would need to be taken following an exit. He also explained why the referendum was being held during the Glastonbury Festival and what steps the Government are taking to help the steel industry.

He unveiled a campaign bus for the 'Brighter Future IN' ground campaign, which is aimed explicitly at reaching younger voters across the UK.

Professor Janice Kay, Provost and Senior Deputy Vice-Chancellor, said: “We were very pleased to welcome the Prime Minister to the University of Exeter and show him the impact EU funding has on our research. Students asked both challenging and entertaining questions and Mr Cameron gave detailed answers.

“We were also very proud that Mr Cameron launched the Brighter Future IN ground campaign at the University of Exeter. While we encourage a diversity of views, we are fully aware of the considerable benefits that the EU brings for our students, our research and the South West economy more generally.”