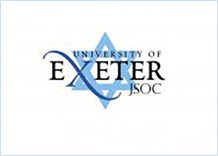 Exeter’s Jewish student society has trebled in size over the past year, and now hosts a series of events for Jewish students around campus.

The initiative included a series of lectures open to students and staff from across the University, including a talk by Professor Siam Bharyo, Exeter’s Professor of Early Jewish Studies, on archaeological finds.

Daniel Mazur said: “I am very pleased that Exeter has been rightly recognised as an open and welcoming place for Jewish students. Our society has tripled in size over the last year and we have created a vibrant community which not only facilitates but allows Jewish life to prosper on campus. This achievement is the work of all our friends at UJS, the Student Guild, and of course our University. It is my hope that our society continues to grow and provide a family environment for Jewish students here at Exeter.”

Jonathan Farrell, head of Exeter’s Friends of Israel society, said:  “It is a huge privilege to know that Exeter Friends of Israel’s efforts in this year's ‘Israel Peace Week’ has been recognised in this way. As a society we remain dedicated to supporting respectful, constructive and positive dialogue on the Israel-Palestine conflict. The society will continue to represent Exeter’s growing community of Israeli students and ensuring that it continues to be an institution that many more Israelis will want to come and study at in the future.”

The President of the Union of Jewish Students, Josh Seitler, said: ‘I’m particularly proud that this year, more Jewish students from small and developing J-Socs have been nominated than we have seen in the past few years, reflecting the fact that J-Socs across the entire UK continue to go from strength to strength.’

The awards follow recognition for Exeter University’s student Islamic Society. The Islamic Society of the Falmouth and Exeter Student Union, based at the Penryn Campus in Cornwall, earlier won the Supernova Award for Best Newcomer for Charity Week. This academic year it also won the Community Heroes award from the Federation of Student Islamic Societies.