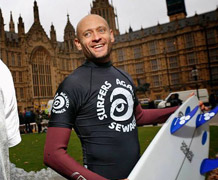 The head of leading marine conservation charity Surfers Against Sewage, Hugo Tagholm, will be delivering a public lecture about the organisation at the University of Exeter Medical School in Truro this week (May 11).

The talk, entitled The Evolution of Surfers Against Sewage, is open to all, and some places are still available. It is the first in a series being hosted by the University of Exeter in celebration of its Diamond Jubilee this year and will be hosted by the University’s Vice-Chancellor and Chief Executive, Professor Sir Steve Smith.

The event will take place at 6pm on Wednesday May 11 in the Knowledge Spa, will be streamed live to the Streatham campus in Exeter and is open to staff, students and the general public, although anyone attending needs to pre-register.

Hugo, who has been chief executive of SAS for eight years, has overseen the transition of the charity from a single issue campaign group to a leading environmental campaign group tackling issues such as marine litter, coastal development and water quality and one with national and international influence.

He first became involved with SAS when he entered a body-board division of a SAS surf competition 25 years ago, and became a campaigner and trustee in the 2000s. He now leads a team of campaigners and environmentalists that has retained the hard-hitting tactics of the 1990s while evolving to take on environmental challenges facing the world’s waves, oceans and beaches.

Prior to taking up his position with SAS, Hugo has worked at a senior level with various charities big and small including Climate Coalition and the Wildlife Trusts. He also worked for a number of years with Sarah Brown, the former Prime Minister’s wife, helping her to set up PiggyBankKids, a charity supporting premature babies and under-privileged children.

Hugo Tagholm said: “I’m delighted to be talking about the evolution of Surfers Against Sewage as part of the University of Exeter's Jubilee Lectures. I've always had a passion for the marine environment and was truly inspired by the campaigns of SAS in the 1990s, so it’s a great honour to be leading the charity through a period of sustained growth and impact, with an ever-growing scope and national impact on a variety of key issues from marine litter to water pollution.”

Professor Sir Steve Smith said: “I’m looking forward to launching our Jubilee lecture series with such a fascinating talk, which I’m sure will be of great interest to a wide range of people. In our 60th year, we are inviting high profile speakers from the worlds of academia, business, the arts and civil society to the University to share their thoughts and ideas, provoke discussion, and challenge us to rethink how we understand society. Through this series of lectures, we hope to engage our audience on a range of topics relating to issues which face us today. From global conflict to food security, climate change to mental health, we have spent the last six decades growing our research in order to address these most pressing world problems and enhance our understanding of their impact."

The lecture will take place in the G10 Lecture Theatre, University of Exeter Medical School in the Knowledge Spa, Truro, Cornwall, TR1 3HD with a video link to the University of Exeter XFI Henderson Lecture theatre, Rennes Drive EX4 4ST. The Knowledge Spa hosts one of the University’s four campuses, and accommodates medical students in their clinical placement years, and the Medical School’s European Centre for Environment and Human Health.

To register to attend the lecture go to eventbright.