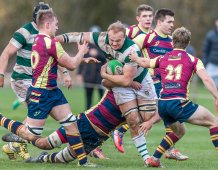 The University of Exeter Men’s rugby team are making final preparations ahead of defending their status as the best student team in the country.

The University of Exeter Men’s rugby team are making their final preparations ahead of defending their status as the best student team in the country.

Exeter’s 1st XV will travel to the iconic Twickenham stadium, home to the RFU and England Rugby, to take their place in the final of student sport’s most prestigious competition.

They will compete against Hartpury College in the prestigious British University and College Sports (BUCS) Rugby Union Championship Final on Thursday, 30 March.

The players will be looking to secure a second successive victory in the competition, having defeated Loughborough 21-19 with a dramatic late drop-goal last year.

Speaking before the event Simon Linsell, the 1st team captain, said: “We are very excited to be playing at Twickenham for the second year in a row and can’t wait for the final. Despite a slow start, our season has gone well so far and we ended up second in the league, just missing out on top spot to Hartpury. The final will be an excellent opportunity to see which team is best and we hope it’s us!"

Exeter secured their place in this year’s final after beating Loughborough once again in the recent semi-final, racking up a half-century of points to seal victory in a pulsating game.

This year will be the second time since 2004 - when current Exeter Chiefs Head Coach Rob Baxter was in charge - that a University of Exeter Men’s Rugby Club team has reached the final, which they also won in 2001.

Alison Davidson, Director of Sport at the University of Exeter, was delighted by the result. She said: “To reach the final for the second year running is a truly fantastic achievement, and everyone who has played a part in the journey to Twickenham should be extremely proud of their efforts.

The players, the coaches, the fitness team and the entire team of people who support the players deserve a lot of credit, and everyone at Exeter wishes them every success for the final.”

Rugby is one of Exeter’s nine focus sports, and in the 2014/15 British Universities and Colleges Sport (BUCS) rankings the institution was ranked 1st for rugby overall. The University of Exeter Sports Scholarship Scheme is one of the most prestigious in the UK, helping the best student athletes reach their full potential. The scheme provides a comprehensive support package and is tailored to suit the needs of each individual athlete. Many of our graduating scholars have progressed to a professional level in their chosen sport and represented their respective countries on the global stage.

Tickets for the final are still available, by visiting the BUCS Championship Finals pages.