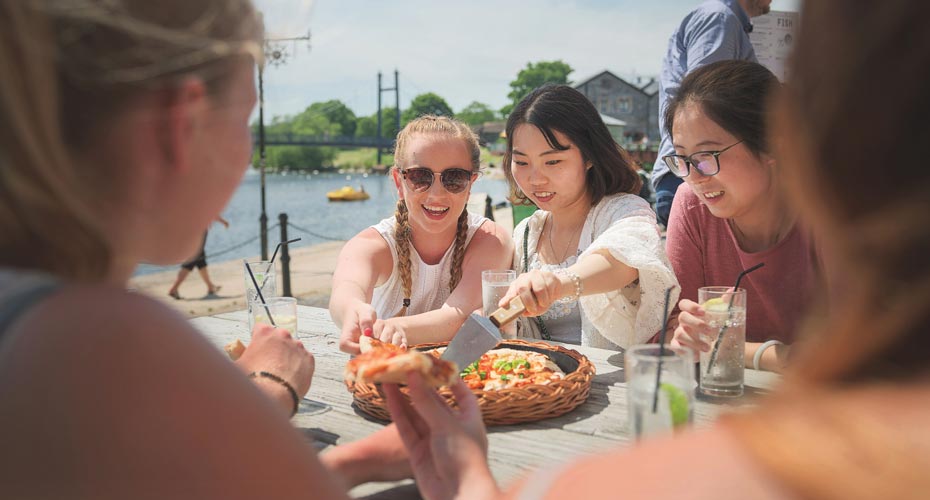 Pizzas at the Waterfront 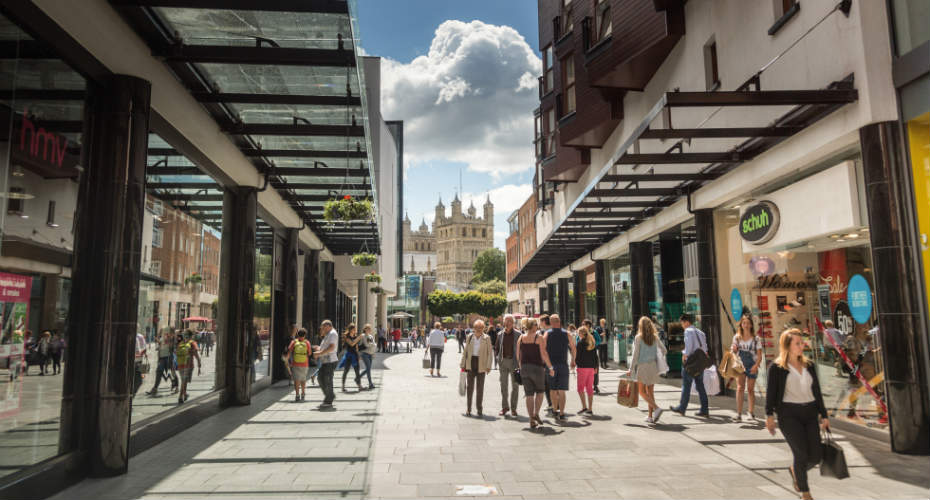 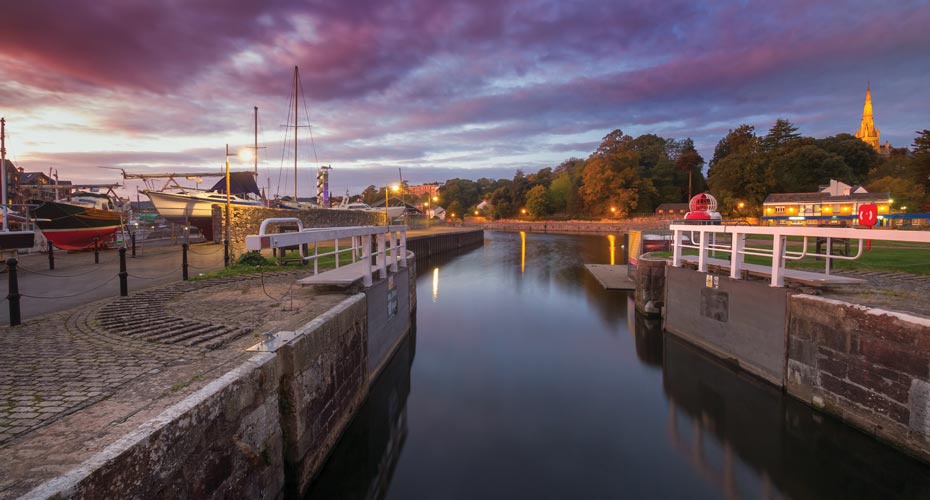 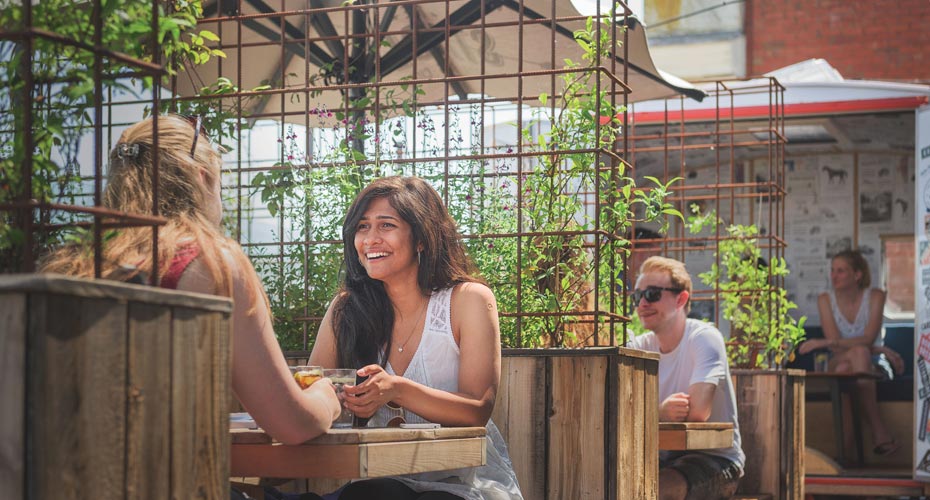 Rooftop bar at The Exeter Stable 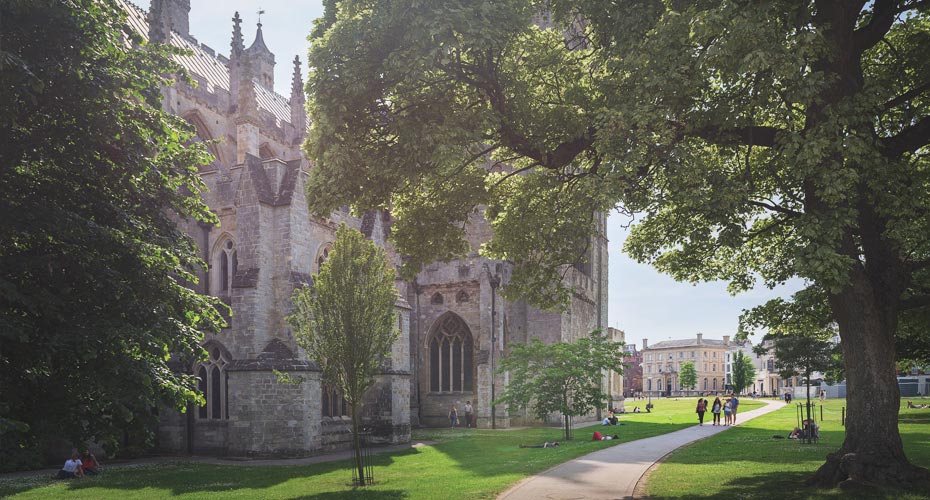 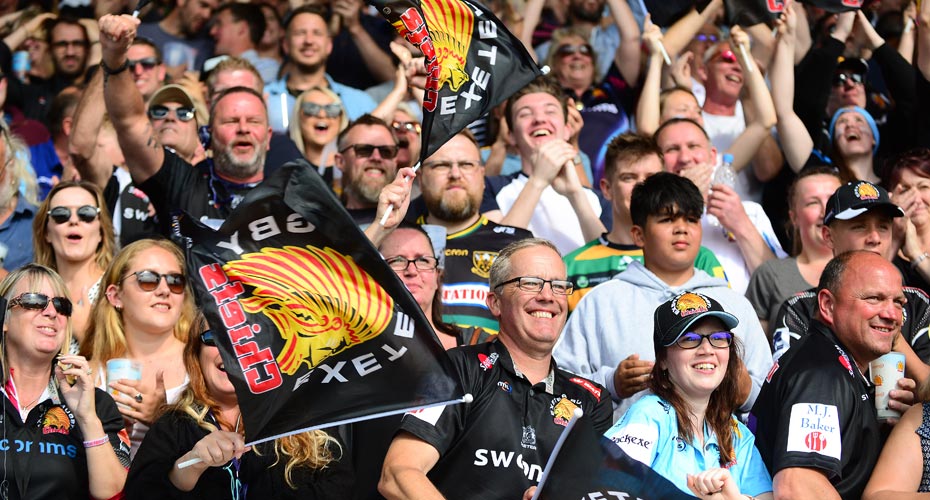 A modern city with a rich history

Exeter is home to our main site, the Streatham Campus on the edge of the city, and St Luke’s Campus in the heart of the town. Set in the heart of the beautiful Devon countryside, Exeter is consistently rated as one of the best places to live, work, and study in the UK. It's a lively, vibrant city with a strong independent sector. There are boutique shops alongside high street stores, and quirky cafes peppered amongst independent restaurants using locally sourced produce. As well as this our very own alumna, JK Rowling is said to have taken inspiration from Gandy Street for how she pictured Diagon Alley, the 'go to' place for wizarding supplies in her infamous Harry Potter books.

The cathedral city of Exeter is Devon's capital and the exquisite coastline and impressive national parks are only a short drive, cycle, bus or train journey away. With direct flights from Exeter to London, the city is better connected and more accessible than ever. 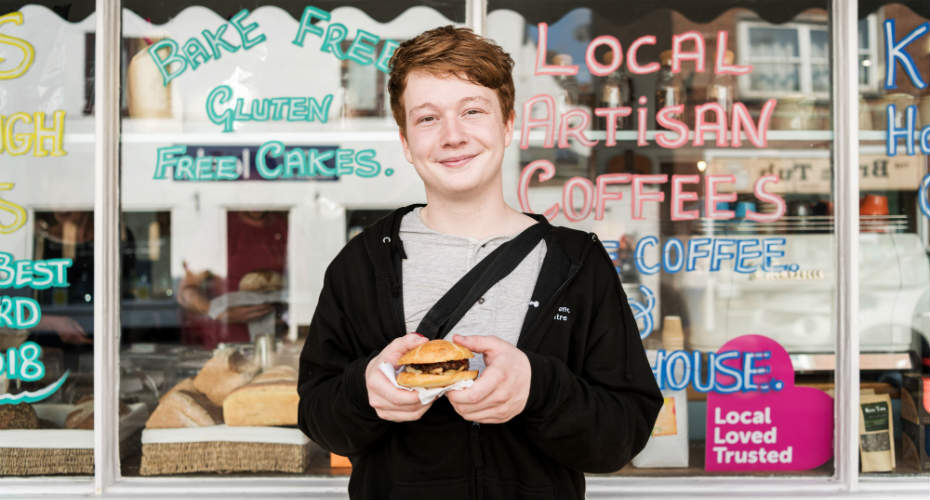 The South West is renowned for its contribution to the UK’s rich food and drink culture and it’s no surprise that renowned chefs like Hugh Fearnley-Whittingstall, Rick Stein and Michael Caines make their home in the area.

Exeter is at the heart of the South West food scene with a vast array of outstanding restaurants, coffee shops, delicatessens and markets. It also hosts the annual Festival of South West Food and Drink, drawing people from around the country to experience the best the region has to offer. The city boasts an abundance of independent and small-scale eateries, from burger joints and gastro-pubs to street food and international cuisines as well as chain restaurants.

The quayside becomes a student favourite, especially in the summer time whereby students can enjoy pizzas al fresco and can sit on suntrap terraces overlooking the river.

Queen Street Dining at the Guildhall offers eight restaurants from Caribbean fayre, American diner style eating to Lebanese and Middle Eastern cuisine. Queen Street Dining quarter provides a perfect location in the heart of Exeter in which to wine and dine. 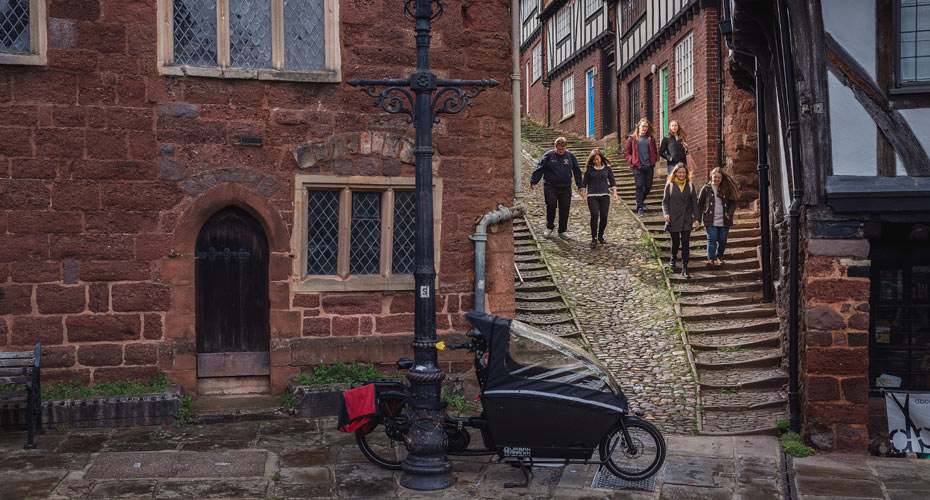 Exeter has one of the longest and most distinguished histories of any British city and you're never more than a few steps away from a reminder of its diverse and exciting past. Around 70% of the 2000-year-old Roman Wall which defined the original city perimeter still stands, including all four main gatehouses, which played a key part in the English Civil War.

Located right at the heart of the city centre is Exeter's imposing gothic cathedral which boasts the longest unbroken stretch of 13th Century Gothic vaulting in the world, an early set of misericords, and an astronomical clock, as well as stunning stained glass windows and some of the finest medieval sculptures in England. It is also home to the Exeter Book, Codex Exoniensis, a 10th century collection of Anglo-Saxon poetry. Located underneath the cathedral and running beneath the heart of the city are a set of 14th century underground passages, built in medieval times to bring clean drinking water from natural springs just outside the city walls into the heart of the city, and uniquely explorable today via guided tours.

Rougemont Castle, founded for William the Conqueror in 1068 is mentioned in Shakespeare's Richard III in reference to Richard’s visit to Exeter in 1483. Devon's county court was located here from at least 1607, and the three Devon Witches, ‘The Bideford Witches’ (the last people in England to be executed for witchcraft) were tried here in 1682. It is now a scheduled ancient monument with Grade I and Grade II listed buildings. A number of events take place throughout the year at the Castle including festivals, concerts, and exhibitions.

Many of the city centre’s ancient buildings were destroyed during World War 2 as part of the so-called “Baedeker raids” (Exeter Blitz), in which targets were chosen for their cultural and historical values. This created an intriguing mix of ancient and modern architecture across the city centre, making the areas that survived all the more special and interesting places to visit. 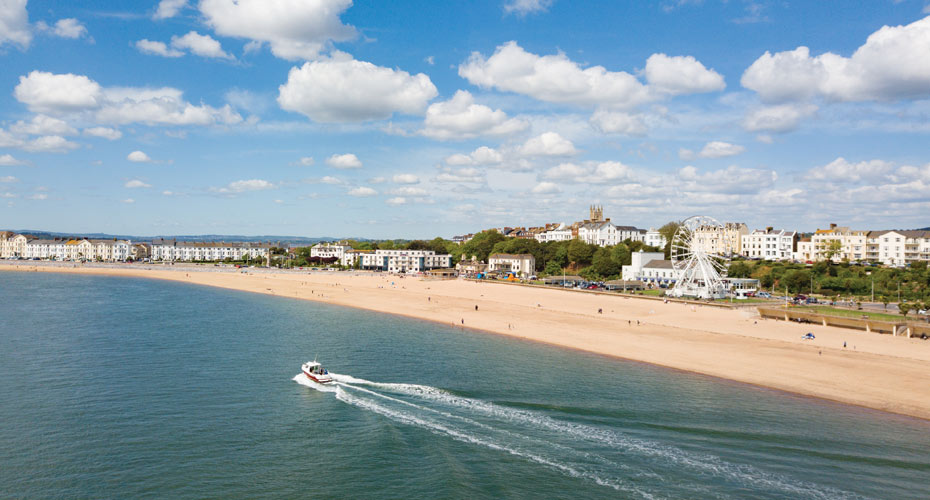 One of the most attractive areas of the city, Exeter’s historic quayside is popular with locals, students and visitors alike. A 10 minute walk from the city centre, it has a fascinating history, beautiful architecture, lively pubs and restaurants, and a cluster of antique shops. A multitude of events happen on the River Exe throughout the summer, including dragon boat racing, open air concerts, markets, street food, charity events and art exhibitions. The Quay is also a launchpad for accessing National Cycle Route 2, which stretches down both sides of the Exe estuary, to Exmouth and Dawlish beaches.

Many people hire bikes or canoes/kayaks and cycle or row along the canal to the Double Locks and Turf Locks Inn, two great, student friendly pubs. You can also take boat trips along the River Exe and Ship Canal with Exeter Cruises. Cruises normally take place at weekends between Easter and October, and daily in July and August, and you can choose the 45 minute round trip, or stop for a bite to eat before catching a later boat back.

Beyond Exeter itself there is a huge range of diverse and exciting places to visit and things to do. From walking on Dartmoor or Exmoor National Parks which offer stunning landscapes, deep wooded valleys, flowing rivers and rugged wide open spaces to exploring the beaches of the English Riviera or the historical and stunning Jurassic Coast, England's first natural World Heritage Site, covering 95 miles of coastline from East Devon to Dorset.

If shopping, retail and exploring local cuisine are more your thing, then venturing a couple of miles down the river to the picturesque, quaint, town of Topsham brings further delights with it's cosmopolitan atmosphere and it's vibrant mix of independent boutiques, galleries, gift shops and gastro-pubs. Similarly a short train ride away will take you to the South Hams region which is designated as an Area of Outstanding Natural Beauty with its beautiful landscape, quality local food, culture and scenic beaches. Here, you can explore the popular resort towns of Dartmouth, Salcombe or venture to Totnes, a town full of character and charm. 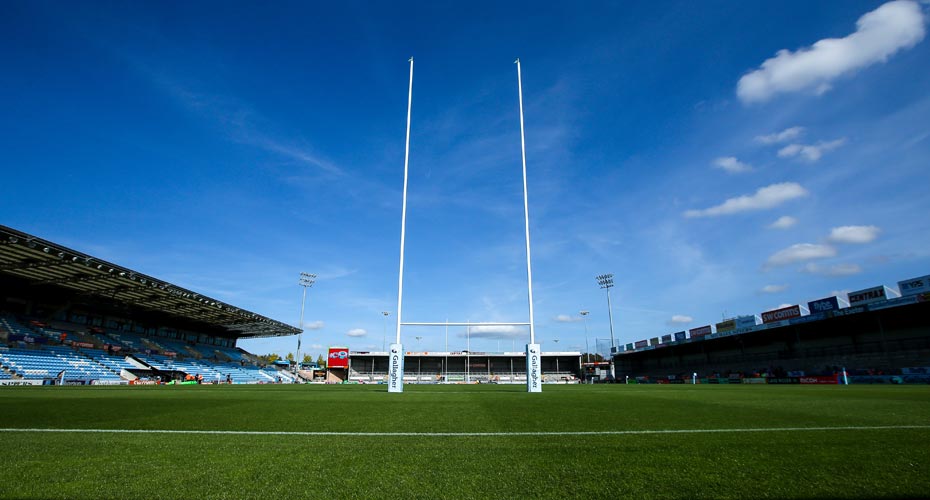 The city is home to a diverse and dynamic arts and culture scene that sets it firmly on the map as the cultural centre of the South West; it’s what makes Exeter a vibrant place to live and study. It also plays a vital role in maintaining Exeter’s reputation as a thriving, flourishing and creative city.

As well as three independent theatres (Barnfield, Northcott and Exeter Phoenix), the city centre is home to two multiplex cinemas (Odeon and Vue), plus a pair of smaller independent cinema venues (Picturehouse and Exeter Phoenix) should you prefer arthouse films, world cinema, family and independent films as well as mainstream movies. The Exeter Corn Exchange which is one of the largest multi-purpose venues in the city centre. It runs a regular and varied programme of entertainment throughout the year including concerts, dances and comedy, from well-known stand-up comedians

There's an award-winning museum of national importance (RAMM), plus a number of independent galleries dotted around the city, and a sizeable arts centre and creative hub right in the city centre.

In addition to the University’s high performance and award winning sports teams, we are fortunate to live in a city which is host to high achieving teams. Exeter was a Rugby World Cup host in 2015 and is home to Premiership Rugby team the Exeter Chiefs who play their home games at Sandy Park, which is located on the outskirts of the city and is accessible via bus or train. Football fans can be entertained by supporting our League Two football team, Exeter City F.C. who play their home games at St James' Park in the centre of the city. 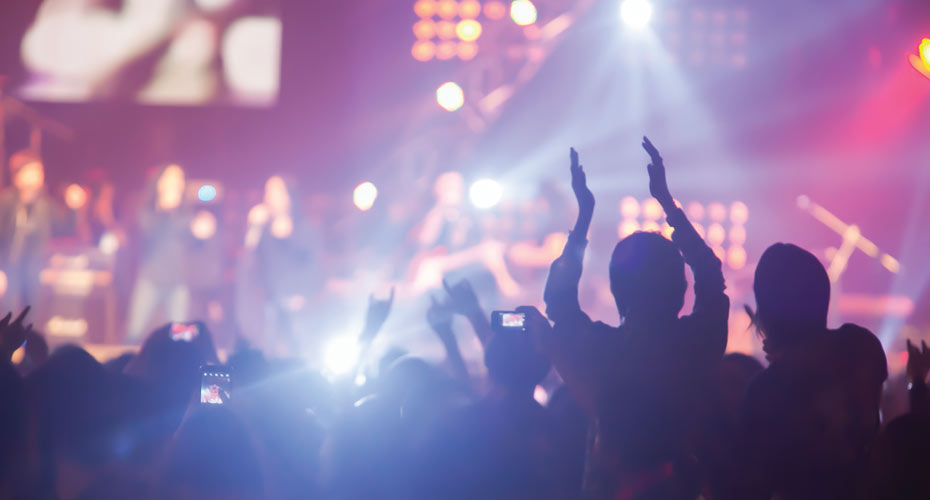 The high proportion of students in Exeter makes for a buzzing, creative nightlife despite the relatively small size of the city's population. A number of independent local breweries feed the city’s varied pub culture, which stretches from big chain venues to quirky and intriguing pubs found tucked away in corners and side streets. While the city’s nightclubs aren’t numerous, a culture of outdoor events offers a surprising amount of variety, while arts centres, (literally) underground music venues, and independent theatres ensure there’s plenty of choice of live entertainment for a great night out.

There are pubs a plenty within mere minutes of both our Exeter campuses and popular student favourites include the enormous Imperial, a giant Wetherspoons with rolling gardens near St David’s train station; and The Old Firehouse, famed for its excellent range of beers and ciders and its giant late-night pizzas.

Across campus you’ll find more alternative fare at the Lemon Grove (Lemmy), while the city centre is home to the region’s subterranean punk-rock mecca, the Cavern. Round the corner from there, The Phoenix is Exeter’s art centre and cultural hub, with live music several times a week ranging from folk, blues, jazz and world to banging techno and indie rock.

Obviously Exeter can’t compete with the likes of London or Manchester if you want to dance all night, but there are still plenty of options. Unit 1, just off Sidwell Street, runs most of your common-or-garden cheesy student nights. Timepiece is Exeter’s self-proclaimed “half decent nightclub” and caters for both the city’s more discerning club-goers and an inordinate number of sports team socials depending on which night of the week it is.

Elsewhere Rosie's, Fever & Boutique, The Terrace, and, of course, the Lemmy, offer student-friendly variety, while promoters run an array of high-quality nights, booking the best names in dance music at venues across the city.

Why our students love Exeter

Don't just take our word for it, find out why our student bloggers love living in Exeter.

5 tips to get involved in Freshers Week

1. Online Freshers Fair It’s inevitable Freshers Fair has to be moved online due the pandemic. With the accessibility of social media platforms, engage with other students on Facebook and Instagram, where you can find support in the big Exeter community. There would be online events, such as live Q&A, Instagram takeovers and society...
by Cheuk Ying Cherry Wong, 04 September 2020

10 things you must bring to university

Last year before I travelled to Exeter, I was on a family trip and all I did was bring suitcases full of clothes, but – THIS WAS NOT A LOGICAL DECISION! And I wanted to save up a few hundred pounds, my mum then sent me a few parcels from Hong Kong, with several items...
by Cheuk Ying Cherry Wong, 28 August 2020

5 things I wish I knew before coming to university

Studying Contact Hours Despite being a university student, and told that you should become more independent and not rely on your lecturers and tutors to spoon feed you your learning materials, don’t forget that you can always seek help from your tutors during contact hours. If I had a chance to repeat year one, I...
by Cheuk Ying Cherry Wong, 24 August 2020

Not only is Exeter a beautiful place to live, but it's also such a great learning environment. There is so much support available to aid your studies and future carer as well as your general wellbeing.

Since starting university I feel like I've become more confident as a person. I've been able to meet, work alongside and become friends with people from all walks of life from all over the world.