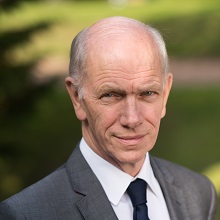 Sir John O’Reilly is Chairman of ERA Foundation Ltd. and of NICC (Standards) Ltd., a Royal Commissioner for the Exhibition of 1851 and a visiting Professor with UCL. He served as Director General, Knowledge and Innovation, in the UK Department for Business, Innovation and Skills (2013-2015) and prior to that as Vice-Chancellor of Cranfield University, (2006-2013) and as Chief Executive of the Engineering and Physical Sciences Research Council (2001-2006). He has held academic appointments at Essex, Bangor, and UCL as well as positions in industry. In the wider international arena he has held advisory roles relating to science and research in Europe, North America, Asia and Australia. He currently Chairs the President’s Academic Advisory Committee and serves on the Board of Khalifa University in UAE, on the Quality Assessment Framework panel for universities with the Ministry of Education in Singapore and is a Board Member and Chairman of the Science and Engineering Research Council for A*STAR, the Agency for Science Technology and Research (A*STAR) in Singapore.

A Chartered Engineer, Sir John is a Fellow and former member of Council of the Royal Academy of Engineering, an International Fellow of Académie Hassan II des Sciences et Techniques and of Academia das Ciencias de Lisbon, a former President of the Institution of Electrical Engineers and of EUREL, the Confederation of European Professional Electrical Engineering Societies. He holds honorary doctorates/Fellowships from the universities of Essex, Bangor, Sunderland and UCL, is an Honorary Fellow of the Institution of Engineering and Technology, Honorary Fellow of the Institution of Chemical Engineers and a Fellow and member of the Board of Trustees of the Royal Aeronautical Society. Widely published, with some 350+ research papers, books and patents he received the J J Thomson Medal of the IEE for ‘distinguished contributions to electronic engineering’ and was awarded a knighthood for contributions to science in 2007.