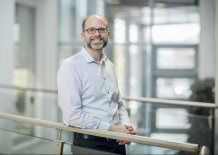 Craig joined the University in March 2018 into the newly created post of Director of Campus Infrastructure and Operational Support Services. He is focused on building stakeholder trust and has a track record in leading organisational change. As a member of the Vice Chancellor’s Executive Group, he has overall leadership accountability for Campus Services, Estate Services and Exeter IT, including development and implementation of the University’s Estate, IT and Digital Capital Infrastructure Plan to enable the Corporate Strategy.

Craig is a Chartered Mechanical Engineer with over 20 years consultancy and industry experience of delivering facilities, services and infrastructure development within a variety of highly regulated sectors including steel manufacture and processing, nuclear power, nuclear defence and higher education.

After graduating with a degree in Mechanical Engineering at the University of Reading, Craig began his career in British Steel in 1995 as a Project Engineer, facilitating continuous steel production before moving to British Nuclear Fuels Limited (BNFL) Magnox Electric in 1999 as a Project Manager, working on numerous safety critical power generation capital projects. Between 2002 and 2006 he worked for WS Atkins Nuclear and the Atomic Weapons Establishment as a Senior Project Manager on a range of major classified defence and nuclear projects. Craig moved into higher education in 2006 at the University of Reading as Head of Project Management, Feasibility and Design with leadership accountability for the delivery of the £250m Estate Development Programme across three campuses.

Craig joined Swansea University in 2008 as Director of Estates and Facilities Management and a member of the University Management Board. He also served as a Board Director of the 50m Wales National Pool Swansea and Swansea Bay 360 Beach & Watersports Centre. After founding the Corporate Responsibility Directorate, he was also appointed as Director of Corporate Responsibility in 2012. During his time at Swansea, Craig was responsible for a wide and dynamic portfolio, most notably leading the development and successful delivery of Swansea University’s new £450m, 65 acre, Science and Innovation Campus and a significant organisational transformation programme of functional alignment between Professional Services and all seven academic Colleges.

Craig was appointed in April 2018 as Chair Elect of the Association of University Directors of Estates (AUDE) and will succeed as Chair in April 2019.

Outside of work Craig serves as a Non-Executive Director of Bron Afon Community Housing in Wales.