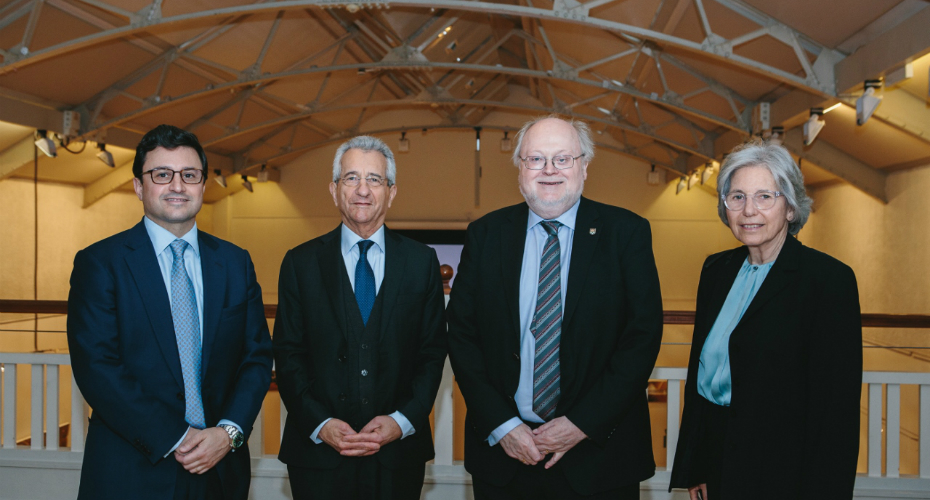 The A.G. Leventis Foundation has extended its support of research at the University of Exeter taking the total value to more than £1 million since the partnership was first formed 20 years ago.

Since then the University of Exeter has received generous support via the Leventis Initiative and Leventis Studentship programme in Classics, and more recently to support a new postdoctoral research post in the Department of Earth Sciences. This means that the impact of the Foundation's support is felt across two major themes of the Making the Exceptional Campaign - Society and Culture and Sustainable Futures.

Research in Earth Sciences is focusing on the important area of understanding how land use practices and other elements of the food system impact biodiversity and climate, and how they could be adapted to be more sustainable.

While the latest funding in Classics will cover a three-year fixed-term Postdoctoral Research Fellowship working in the field of Hellenic Studies, and two three-year Postgraduate Studentships for students undertaking research in the Department of Classics and Ancient History.

The on-going support of the Foundation has provided vital opportunities for young researchers to gain academic experience and to establish themselves within their field. Leventis-supported scholars have been keenly involved in bringing their ideas and discoveries to a wider audience. Taking their research beyond the academic environment of the seminar room and the lecture theatre, and engaging with the public. The Foundation’s long-standing support has played a significant part in Classics and Ancient History at Exeter becoming one of the largest and most successful departments in the UK.

The University is very proud that all scholars have achieved excellent PhDs and secured academic appointments at universities across the world. So their passion for, and understanding of, Greek culture has truly been spread across the world.

Professor Sir Steve Smith, Vice-Chancellor and Chief Executive at the University of Exeter, said: “The University deeply values its relationship with The A.G. Leventis Foundation, a key philanthropic partner in the advancement of the study of Classics at Exeter. The Foundation’s support, which exceeds £1 million, has played a vital role in building research excellence at Exeter.

“Over the past twenty years, generations of early-career academics, graduate students and undergraduates have benefitted enormously from Leventis-funded research and teaching at Exeter.  We are excited to continue to strengthen our dynamic partnership through this latest gift, as we look to achieve our shared values of supporting high-level teaching and research.”

In 2017 Exeter produced a special commemorative book to mark 20 years of exceptional partnership with the A.G Leventis Foundation. You can read it here.

Words cannot describe how grateful I am, and have always been, for the support of the A.G. Leventis Foundation. It has allowed me to devote myself wholly to my doctoral research and given me so many great experiences, opportunities and personal relations, thank you.

The support of the A.G. Leventis Foundation has given a powerful stimulus to the development of research and teaching in Classics and Ancient History at the University of Exeter in the last twenty years.

The Leventis postgraduate studentship has been a catalyst for growth in doctoral research in the department since 1997. The award of funding for the Leventis Initiative on the impact of Greek culture has brought a series of gifted younger scholars and students to Exeter and enabled innovative research on the influence of Hellenism in antiquity and later periods.

Among other benefits, it has promoted work on the potential value of Greek ideas and practices for contemporary healthcare, nutrition, and psychological guidance. The supportive engagement and interest of the trustees of the Foundation in these developments has been much appreciated and has constituted a further stimulus.