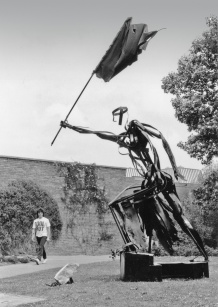 The sculpture in its original location outside Devonshire House

30 years ago staff and students on our Streatham Campus awoke to a new statue on the grounds outside Devonshire House.

Overnight a twelve foot high metal sculpture had been erected by a group of students as a memorial to the events in Tiananmen Square. The sculpture now stands on the Queen’s Drive Lawn and can be seen by all who visit the campus.

Alumnus David Notman-Watt (Drama, 1991) was one of the students involved in the project. He shares his memories of the time.

“On 4 June 1989 I was a first year Drama student at Exeter. It’s fair to say I followed global events quite closely at the time (I still do) and was quite politically active, and the events in Tiananmen Square that day shocked my friends and I quite deeply, as it obviously did the rest of the world.

“Feeling powerless but keen to express our solidarity in some way, I set about getting together a group of art students and friends from the Exeter College of Art and Design to see if there was anything we could create together that might express our feelings in some small way. We decided that a sculpture could be the answer and started to consider options. Delacroix’s ‘Liberty Leading the People’ had always struck me as a powerful and evocative image, and we all agreed that a metal sculpture based loosely on ‘Liberty’ in the painting was the way to go.”

Following the instructions of two or three sculpture and metal-work students the group set to work. They sourced metal from friends who were builders and scaffolders, and worked day and night to build their creation. Despite most having never worked with metal or used welders before, they managed to finish it in a weekend.

David said: “I can’t remember the exact timings of it all but at some stage I went to see the Guild to tell them what we were doing and to try and get them on board. It is fair to say that they were extremely supportive – though for the record at no stage did any member of the Guild of Students condone any illegal behaviour…

“Once completed, we then had to get it across town from the Art College to the University Campus. No, we hadn’t thought it through. Once we had given ‘Liberty’ a giant black flag to hold in her outstretched metal arm we were looking at a fifteen foot high metal sculpture weighing a colossal amount… being winched on to the back of a flat-bed truck loaned to us by one of our many well-wishers. I’m not sure the suspension survived the experience.

“And so we drove ‘Liberty’ through town in the early hours of the morning and deposited it in the grass outside what was then the heart of the Campus, Devonshire House. In front of the sculpture was a marble stone that an art student had beautifully engraved with the June 4th date. No permission was sought or granted. Nobody stopped us. Two or three hours after finally getting it in place the University started waking up to another day. For them the sculpture would have appeared out of thin air.”

The group were unsure as to how the sculpture would be received and whether they would be in trouble with the University for their secret construction.

David said: “I expected the worse, and had fully come to terms with the fact that I would hold my hands up if there was a witch hunt. But there wasn’t. The University authorities at the time obviously condemned the action, but for a very brief time. The Chinese Society at the University embraced it, and that same day candles started to appear at the foot of the statue along with notes, cards, pictures, and a couple of days after that a silent vigil was held by the sculpture attended by students from across the campus. No hunt for its creators ever happened.

“Local and national press picked up the story. The sculpture very quickly became a part of life on campus. In fact a year or two later it was on the cover of the University prospectus! Everyone who took part in making it went back to their courses and to this day remain anonymous. I was astonished when a friend who was in Exeter recently told me that the sculpture is still standing proudly in the University grounds. So on this, the 30th anniversary of the events in Tiananmen Square, I thought it was time we told our humble story. (Note to the Guild: It’ll need a fresh coat of paint every couple of years to keep the rust under control!)”

Since leaving Exeter David has worked in the media, ultimately founding his own production company, back2back production ltd, in 2003. His career began on the Latin America desk at Associated Press Television News and then transitioned into making short documentaries for one of APTN’s magazine shows called ‘Roving Report’ where reporters would travel to remote parts of the world to uncover and film unusual stories. From there he moved on to larger productions before branching out on his own.

David’s time at Exeter stood him in good stead for his future career.

He said: “Did my Drama course help at all? I used to think not, but sometimes when I am pitching in front of a large group of aggressive American TV execs and can hold my own without losing any sleep, I think maybe it did. What I do know is that the University experience as a whole certainly did help, from involvement in the political/activist side of campus life to helping set up the Exeter University Rugby League team to screaming myself hoarse in a band we all formed on campus called Herb aka Fruit Machine (unfortunately we didn’t reach the heights of Radiohead, though they did support us once at the Lemon Grove… kind of!). I have nothing but great memories of Exeter, and realise now that it was by pursuing so many different avenues and trying out so many different things that I started to work out what was what.

“Like most students there was a time after graduating where work was a bit tricky, and getting a break with a company in the field I was interested in wasn’t easy. Television still isn’t easy so if it’s what you want then you’ve got to develop a thick skin if you don’t have one already. Rejection is part of the working day.

“But having said that, the one piece of advice I was given in the early days which saw me through that period was when you do get that break ‘make yourself indispensable’. And that advice still applies today. At back2back we have interns and trainees constantly throughout the year. It is fair to say that the ones who do well and in many cases stay and go on to progress to being fantastic Researchers, Producers, Production Co-Ordinators etc are the ones who don’t arrive thinking the world owes them a living. They’re the ones who arrive ready to roll their sleeves up and get stuck in (who cares if you haven’t used a welder before!). Those are the young trainees we have always looked for, and I’m pleased to say that they are still out there.” 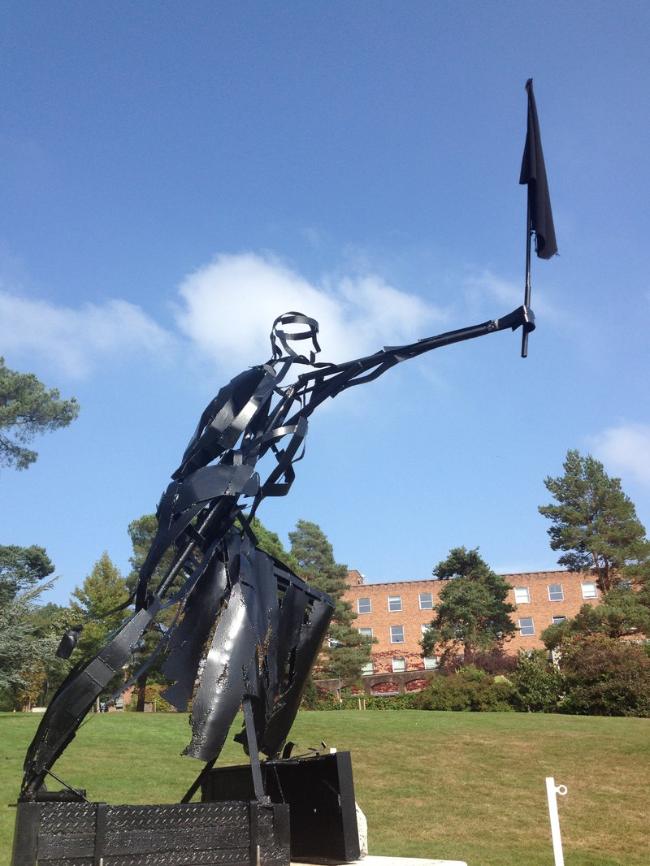 The statue in its current location