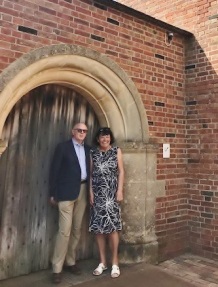 Mary and Eric outside the Mary Harris Chapel on their recent visit.

Alumni return to campus wedding venue to celebrate 50 years together

A couple who met while studying at the University of Exeter in the late 1960s have returned to campus as part of their golden wedding anniversary celebrations.

Dr Mary Griffiths née Cornelius (History and Politics, 1969) and Eric Griffiths (European Studies, 1969) were married at the Mary Harris Chapel on Streatham Campus in April 1969 just prior to graduating. The ceremony, which they managed to organise in just three weeks, was attended by friends and family, many of whom joined the couple in Exeter this Easter to mark 50 years together.

Mary said: “In our third year I moved into a shared house with some girls who were also friends of Eric’s and we met on the stairs as I moved in. We’ve been together ever since! We also studied a number of the same options including a Cultural Studies course led by Dr Golant, an American lecturer, who had a very modern approach to his lectures that included the study of C20th Art, Film, Media and Literature which we both found inspirational.”

Mary and Eric decided to get married on campus as it was part of their shared experience and they were able to get all their friends together before everyone left after graduation. This was also just before their final exams which meant they had very little time to plan!

Mary said: “The University Chaplain was very helpful and kind. At the time the Chapel hadn’t yet got a licence so we had to have a registry office ceremony as well. We also did not have much money, so I made my own wedding dress, we found someone to make a cake, we hired a room in Devonshire House for our reception and the University did the catering.

“My father persuaded the University security staff to look after a tape recorder by hiding behind the altar in the Chapel and his best friend made a cine film of the event too! Dr Golant attended along with all our Exeter friends, and family who had travelled down. All the photos were taken by Vosper Arthur, the photographer from town, and coincidentally my friends rented a flat over his shop in the city so they got a preview of the wedding photos before we did!”

After the ceremony Mary and Eric spent a night in a Torquay Hotel followed by a camping trip to the Scilly Isles. In between they both managed to fit in taking their final exams and successfully graduating.

Upon leaving Exeter Eric secured a place to study for an M.Phil at Imperial College in London and then in 1970 the couple moved to Wolverhampton where he completed his postgraduate diploma in education. Eric stayed in education culminating in being appointed Director of Education in Sandwell, West Midlands and later had his own consultancy. Mary completed a PhD in the history of social housing, working in local government housing departments and housing charities before becoming Course Director for postgraduate housing courses at Birmingham City University. In retirement Mary has also held the Chair of a Housing Association and Eric continues his involvement in education as a Director for two academy chains.

Of their time at Exeter in the late 60s, Mary said: “In my first year I shared a room in Lafrowda with an American girl from Syracuse in New York State, where coincidentally my brother (also an Exeter graduate, 1965) had gone to study for a masters degree and to teach Creative Writing. I also passed my driving test while living there. I was so elated when I passed that I forgot to collect my car - a Ford Prefect - from where I had parked it and walked back to Lafrowda before I remembered it. I was allowed to keep my car in the garage at Lafrowda too, which was amazing.

“In the second year I was lucky enough to be in the Film Theatre one morning when a fellow student came in with a brand new copy of The Beatles ‘Sergeant Pepper’ Album. We listened to it, about six of us, over and over. It was so innovative and unusual - hard to convey to people now that it has become background to our lives.

“In the late 60s there was an excellent social and cultural life at the University. Top groups performed there as part of their national tours; to mention a few - The Who, Arthur Brown, Bonzo Dog Doodah Band, the Bee Gees and so on. I vividly remember hearing Ravi Shankar performing and also the amazing Indo-Jazz Fusions. There were regular Discos in Devonshire House and also at The Quay Club in the city.

“The Arts scene too was impressive with the Northcott Theatre providing performance space for productions like Pinter’s The Birthday Party but also folk music with Pentangle. In the Great Hall I saw MJQ (Modern Jazz Quartet), John Williams performing classical guitar, American Big Bands and Jazz performers on tour, plus the Bournemouth Symphony Orchestra were regular visitors. The Film Society showed Art films and up to the minute must see films by directors like Jean Luc Godard, Jacques Tati and Ingmar Bergman.

“Eric was a regular in the Gandy Street Coffee Bar and I have other great memories of cider drinking at The John Bull, and other hostelries in the city. Getting locked out of my digs and having to sleep overnight on a bench at the station. Trips to the beaches nearby and as far away as Padstow for the May Day celebrations - a scary number of us packed into my little car and having to push it up hills on the way back!

“These were privileged times to be at university because of student grants. Also Exeter was unusual in that there were roughly equal numbers of male and female students - so it was not as male dominated as elsewhere. The University gave access to an amazing cross section of young people and was in all senses of the word life-changing.”

Mary and Eric have returned to Exeter a few times since their graduation, but not for such a big occasion before. This time they also brought their grandchildren to see what the University has to offer. "Having the tour from a student was great." Mary said. "We all enjoyed it very much and the campus is as stunning as ever." 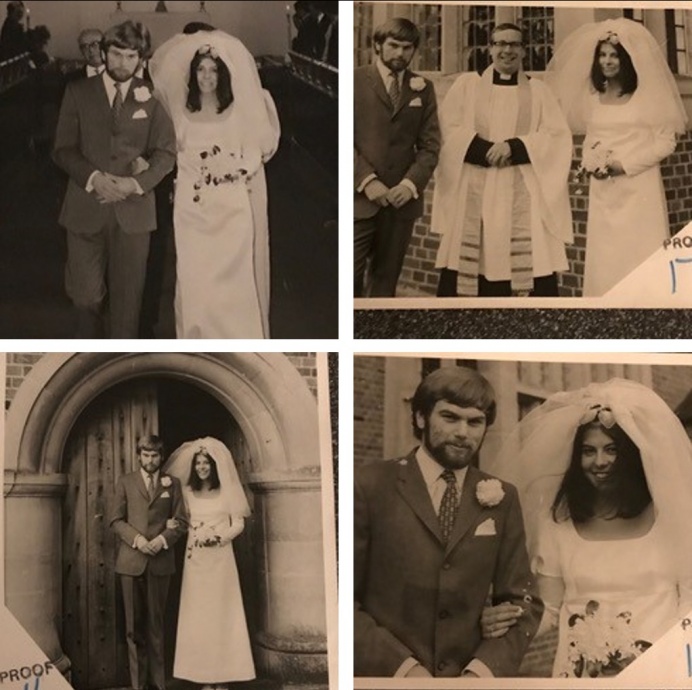 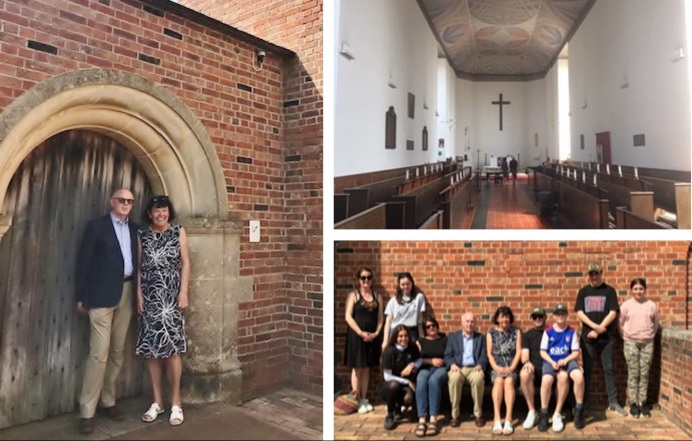 Mary and Eric at the Chapel in 2019 with their family