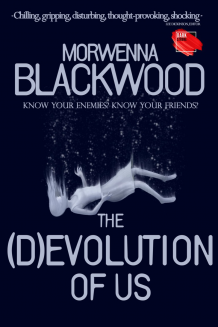 Massive congratulations to our alumni authors who have had their books published.

Morwenna Blackwood (MA English, 2016) has recently published her debut noir thriller, The (D)Evolution of Us

Cath is dead, but why and how isn’t clear cut to her best friend, Kayleigh.  As Kayleigh searches for answers, she is drawn deeper into Cath’s hidden world.  The (D)Evolution of Us questions where a story really begins, and whether the world in our heads is more real than reality.

An original text for everyone managing or taking risks with their lives or their money. For the first time effectively linking together real life examples and data and their uncertainty with new concepts, new ideas, risk ranking, an easy-to read style and practical advice as well as personal examples. This book is available to buy online.

He has also completed Geophysical research at the NLO entitled Norman Lockyer Observatory: Origins and History. Undertaken over three years, and visits to the NLO and University Archives, the work documents his perspective of the work conducted at the NLO by the University from 1960-1985. This history and the knowledge of what went on was completely lost in the decline and subsequent transfer of ownership by the University to the present NLO Trust. Copies of the bound text volume are now in the possession of the University Special Collections archive and of the NLO Trust, who both facilitated this research and are also acknowledged in the text.

Amanda Davey (Geography, 1983) has published two books Warmer Down Below: the autobiography of Sir Harold Harding, 1900-1986 (edited by Amanda), and Freckles and Friends: true stories of garden wildlife

The first is a highly engaging book details the career of Sir Harold Harding (HJBH), founding Chairman of the British Tunnelling Society, past President of the Institution of Civil Engineers and high profile civil engineer. The second is based on a young robin in Amanda's garden she called Freckles. Amanda tells the stories of young Freckles and the other residents of their small garden. This book is aimed at 7-11 year-old children, but is readable by anyone with an interest in funny stories and in wildlife

You can find out more information on and buy both books online.

The Big Ideas in Science is an accessible and easy-to-use introduction to the scientific world, what it has achieved over the past few hundred years, and what it promises for the future. Covering everything from the Big Bang to global warming, it provides everything you need to know in one book.

Kim Hillyard (Drama 2007) has an upcoming publication release of her debut author-illustrated children's picture book Mabel and the Mountain. The book will be released in July.

Brian Landers OBE (Politics, 1970) has a new series called The Dylan series set to be published this summer. The first book in the series Awakening of Spies will be published on 25 June, with the next book Families of Spies following in July.

In the first book novice spy Thomas Dylan’s first mission is a failure. Despite that he’s sent to Rio de Janeiro to recover secret material stolen from the US Navy. He is obviously out of his depth in a city of sun, sea and secret police. But nobody seems to care. MI6 and the CIA have their own priorities – and saving his life isn’t one of them. A stylish story of international intrigue, deception, betrayal and a dash of romance.

You can find out more information and pre-order them online now.

Cliff Parrett (Social Sciences, 1962) has compiled and published several limited editions of Indian Order of Merit: Historical Records in three volumes and is currently working on a fourth volume covering 1912-21

The volumes feature historical records of a gallantry decoration known as the “Indian Order of Merit” (IOM), which was the highest decoration awarded to ethnic Indian officers and other ranks of the Indian Army during the British era and was considered to be at the same level as the Victoria Cross. There was also a civil division of the IOM in which the gallantry of police and non-military personnel were similarly rewarded. The work describes the context of the individual awards in some detail as well as biographical information of particular interest where known. The first volume was published in 2010 and the next two in 2019. There will eventually be six separate volumes covering the period of the currency of the decoration from 1837 to 1947.

You can find out more and purchase copies online.

Caroline Pover (Maths & Education, 1995 ) will have a new book coming out in August called One Month in Tohoku: An Englishwoman’s Memoir on Life after the Japanese Tsunami

On March 11, 2011, one of the biggest earthquakes in history occurred off the northeast coast of Japan, triggering a deadly tsunami that destroyed much of the Tohoku coastline. Driven by a desire to help the people of Tohoku, long-time Tokyo resident Caroline Pover embarked on a mission to collect emergency supplies from her native UK. Caroline delivered these supplies to an isolated part of Japan that even many Japanese have never heard of: the Oshika Peninsula. While there, she saw beyond the horror of the debris and destruction, and unexpectedly fell in love with the beauty of the landscape and the spirit of the people who had called the peninsula home for hundreds of years since their samurai ancestors first settled there. Compelled to do whatever she could to help, she promised to return, once more, for only one month …One Month in Tohoku is the true story of what became the many months Caroline spent visiting Oshika.

This book is available to pre-order online.

The book traces the history of the world's most prolific manufacturer of steam road rollers from its origins as an agricultural machinery repair shop in Rochester to its purchase from the receiver by Edward Barford in 1933 to become Aveling Barford. James has for many years been trying to promote interest in the Industrial History of Kent, and currently has three other books in print: "Malting and Malthouses in Kent": "Kent's Transport Heritage" and "Kent's Industrial Heritage".

When have you had a Eureka sensation? A blissful moment when the light bulb turned on in your mind and you thought "I understand this now!". One of the great minds of human history had his Eureka moment thousands of years ago. Archimedes' ideas were so powerful that they still influence the world today. Read “Floating Ideas” to spark your creative discovery.

This book is available to buy online