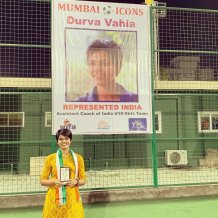 Durva Vahia, University of Exeter alumna (MSc Paediatric Exercise and Health 2017), has been making a big impact in India, coaching both women’s football and being the lead sports scientist for one of four elite boys youth academies in the country.

At the beginning of 2019, her achievements were recognised by the Mumbai District Football Association who felicitated Durva as a Mumbai Icon at the local Yuva President League, held at Cooperage football ground.

In September 2018, Durva was appointed assistant coach of the under 19 Indian Women’s Football Team for the South Asian Football Federation Cup in Bhutan, where they secured third place. She also coached the team in the Asian Football Confederation Championship Qualifiers in Thailand, in October 2018.

Durva currently works as a lead sport scientist at Reliance Foundation Young Champs (RFYC). Based in Navi Mumbai, the RFYC is one of the first football academies in India to have a dedicated sports science team for youth football.

“The most motivating aspect of coaching is the difference you can make in the lives of athletes” says Durva.

“Helping them see the best possible version of themselves and guiding them on their path to achieve it, makes all the obstacles worth it.

“My longest and most fulfilling coaching assignment was with the Maharashtra Youth Women's Teams. I coached them for 3 years and watched the girls grow up. They looked up to me and trusted me and that pushed me to be better and do better, every single day.

“I truly am a better person and coach because of them and will always be grateful.

Durva has also worked with the national team in India, which she explains is one of her proudest achievements.

“When you wear the national team colours you have a duty to give it everything you have since you represent not just yourself, but all the people of the nation. You have been selected and trusted to represent the nation, one that very few have the opportunity to do.

“The first time I heard the national anthem at the start of the game, while wearing the Indian team colours, I got goosebumps.

“Not to minimise other accomplishments, but none other have the same emotional effect as this. It's something I've dreamt of since I was a young girl and something I will cherish dearly for the rest of my life.”

Durva graduated from the MSc Paediatric Exercise and Health programme with a distinction in 2017, under the guidance of Professor Craig Williams, whose support, she explains, has helped her to develop as a sport scientist.

“Even after completing my masters, Professor Williams continued to support my development and helped me grow, every step of the way.

“His knowledge and experience has helped me develop my career and amalgamate my research and application.”

During her time at the University of Exeter, Durva published a research paper in the Paediatric Exercise Science Journal, titled: Variation in the Correlation Between Heart Rate and Session Rating of Perceived Exertion-Based Estimations of Internal Training Load in Youth Soccer Players,which she presented at the 23rd Annual Conference of European College of Sports Science in Dublin. Durva was the only masters student from the University to be selected to present at the conference.

“What Durva has achieved in such a short space of time is testament to her tremendous commitment, energy levels and intellect” said Professor Craig Williams.

“At Exeter not only was she a great practitioner in her time as a player and coach, but her thirst for knowledge in understanding how paediatric sport and exercise science can benefit youth athletes was insatiable.

“She is a great credit to Exeter and the Indian football coaching community.”