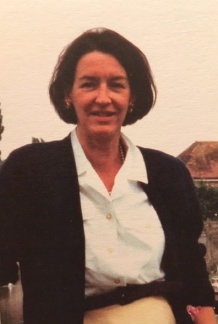 More talented students from underrepresented groups will be able to benefit from an Exeter education thanks to a generous legacy from alumna Verena Hoffman, née Fairs (German and Russian, 1967).

Verena sadly passed away on 19 April 2018 at the age of 71. In her Will she left legacies to both her school and University to provide bursaries for students facing financial hardship. At Exeter this will ensure more young people can fulfil their potential and look forward to a brighter future.

Verena was born on 18 October 1946, and won a scholarship to study at Sherborne School for Girls before coming to Exeter in 1964. In her third year of study she met Tom Hoffman who was studying Law and they were married in 1971.

After graduating from Exeter in 1967 Verena joined Ginn & Co, a London educational publishing house and by her late twenties she was appointed Editor of the International Who’s Who. Verena gave up full time employment following the birth of her and Tom’s son Alexander in 1975, and worked part time assisting H.V.Hodson (formerly Editor of the Sunday Times and Fellow of All Souls) in editing The Annual Register - a contemporary record of world events whose first editor was Edmund Burke. She remained as Assistant Editor for almost 30 years.

A Service of Thanksgiving for her life, held in Biddenden Parish Church close to Verena and Tom’s home in Kent, was attended by many friends, including a number of her Exeter contemporaries.

More information about the Scholars Fund is available online.