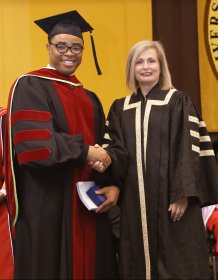 Dr Ifeanyi Nwachukwu receiving his award from Ms. Anne Mahon, Chancellor of the University of Manitoba

The Governor General’s Academic Medal was first awarded in 1873 by the Earl of Dufferin, and has since become one of the most prestigious awards that a student in a Canadian educational institution can receive. The governor general of Canada continues this tradition of encouraging scholarship across the nation and recognizing outstanding students.

Ifeanyi, who graduated with a Doctor of Philosophy in human nutritional sciences from the University of Manitoba in February this year, said: “Predictably, I was filled with excitement and pure delight when I received the news. I was also filled with gratitude to all those – family members, friends, teachers, mentors, research partners and funding agencies – whose varied support along the way made it possible. In addition to the excitement, receiving such a prestigious award often has the capacity to make one want to do more, so I’m all fired up.”

Shortly before his graduation, Ifeanyi accepted an offer of a faculty position from Loma Linda University (California) where he is currently an Assistant Professor in Nutritional Biochemistry. He said he’s excited about this position as it would “afford me the opportunity to integrate elements of my prior academic training in biochemistry, biocatalysis, molecular biology, and nutrition into my research program in public health nutrition. I am also incredibly humbled by the opportunity to play a role in shaping the next generation of scientists.”

Ifeanyi has already travelled the world in his career, studying and conducting research in at least five universities on three different continents. “It has been an amazing journey.” He said. “From forming lifelong friendships and being exposed to various cultures, to learning a new language (German), it has been a most rewarding experience. Each university and lab is obviously different but I have been fortunate to find that the enthusiasm for knowledge and passion for pushing the boundaries were virtually the same. Given the opportunity, I think I’d do it all over again.”

Congratulations Ifeanyi on your award and we look forward to hearing about what the future brings for you!

Remember we love hearing news from our alumni so if you’d like to share a recent achievement, charity/sporting challenge, book publication, or memory of your time at Exeter then please do get in touch via email at alumni@exeter.ac.uk.