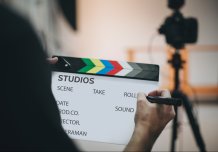 Alumna Mary Brehony (Law, 1979) runs her own firm, Brehon & Co., specialising in legal and business affairs advice for media and commercial clients. She shares where her degree has taken her in her career.

After working in property and commercial law for more than 10 years, Mary founded Brehon & Co. in 1995. The business works on scripted and non-scripted entertainment and film and television production, film financing, general IP/licensing

Mary said: “My uncle originally inspired me to study law - he exercised a calm and balanced judgement of the world and events which I believed was as a result of his training. And in early 80s, a woman really needed a formal qualification even more than a degree to avoid being relegated to a secretarial position.

“After graduation I worked in a small general practice first which was hugely helpful - conveyancing, small corporate, probate and family – and then I moved to larger scale commercial conveyancing, franchising and development work at Denton Hall (now Denton Wilde Sapte), before transferring to the Entertainment Department.”

She has been involved with TV projects including, Have I Got News for You, Drop the Dead Donkey, Whose Line is it Anyway, and Harry Enfield. As well as film projects including, Shallow Grave, Metroland, Bend it Like Beckham, Billy Elliott, and The Last King of Scotland.

Mary said: “The amount of involvement I have in productions varies. If I am on the production side, I am often standing in the producer’s shoes as an exec producer, but if I’m on financier side, then the task is more bank based, analysing the loan risk. At the end of the day, the banks are supporting the producer so it is a constructive and collegiate environment. Lawyers do visit the film sets from time to time to meet everyone involved face to face but it is not a day to day event. The legal work is hopefully tied up by the time the cameras start to roll.

“Running your own business is challenging. You have to do absolutely everything including ordering the loo rolls, but I found the most difficult aspect at the start was managing other people’s work expectations and career development which was difficult in a very small firm.

“However you get more professional satisfaction to know the client is employing you direct, and you have more control over the advice you give which can be tailored in a more business affairs view which the clients often appreciate and which is more cost effective for clients.

“If students or recent graduates are interested in pursuing a career in this type of specialised area I’d advise to do commercial work first and gain broad experience.  Film is a narrow field - well film financing is. If you later try to move to another discipline even to television, you can be restricted and perceived as pigeon holed into one specialisation. Try to keep your experience broad or keep changing roles in early years to broaden experience.”