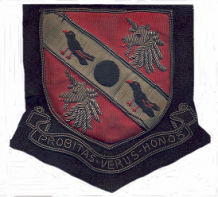 Alumnus Peter Sampson (Economics, 1959) recently returned to campus for a 60th anniversary reunion with his old house mates. Below he has shared his memories of his time at Mardon Hall, and what it was like to be back.

There are six of us left, part of a group of close friends who spent three years together in Mardon Hall in the late 1950s. We were Mardon’s ‘Class of ‘59’ and recently celebrated our 60th anniversary reunion with a visit to Mardon, during Freshers’ Week in September. It has changed more than somewhat! With around 1200 students at Exeter in 1956 close to a half lived in a Hall and most stayed there for three years.

We said our farewells on Graduation Day 1959 and did not expect to meet up again. There was no social media. Few homes had telephones. It was not easy to keep in touch but, across the decades, some of us bumped into each other by chance, as you do.

In 2008 the University Alumni Office organised a 50th anniversary reunion for all 1958 graduates. Two of us who had met in the 1960s and kept in touch heard about this event and decided to set up, in parallel, a reunion for all ex-Mardonians. Seventy of us met in 2008 along with our Warden Brian Clapp. We came together via ‘snowballing’ addresses, using the now defunct website <friendsreunited.com>, and old University Lists. In particular, it brought members of The Mardon Class of 1959 together, most meeting up after fifty years. A year later, nine of us met up again on the Alumni Office’s reunion for 1959 graduates. After that meeting we all kept in touch and occasionally met in small groups in different parts of the country. In September of this year, the six of us above, all in our early eighties, met again in Exeter to celebrate our 60th anniversary of graduating. (Sadly we had lost three peers.)

The highlight of our reunion was to go up to Mardon (by car, rather than walking up ‘Heart Attack Hill’) and chat to a bunch of Freshers who had moved in a few days earlier. We told them how Mardon had been very different in the late 1950s. Then, it was a men’s-only Hall of Residence although, occasionally, one would bump into a young lady either arriving or leaving on the stairs by the side entrance.

Mardon was fully catered. With virtually no inflation between 1956 and 1959, the weekly cost for three meals a day with rooms cleaned and beds changed, was four pounds ten shillings a week - £4.50 in today’s money, about the cost of one and a half M&S sandwiches or a pint and a half of beer.

Meals included a ‘full English’ every morning, lunch, High Tea on Wednesdays, Saturdays and Sundays, with formal dinner on Monday, Tuesday, Thursday and Friday and a formal lunch on Sunday. The formal dinners and Sunday lunches required us to wear white shirts, black Mardon blazers, Mardon ties and gowns. (The gowns were much shorter than those we graduated with and were called “bum freezers”.) At the centre of Mardon was the pre-fabricated dining hall with a ‘high table’ where The Warden, Resident don and ‘Matron’ sat, along with those of us asked to sit up there with them on a rota basis. Apart from matron, it was a mini all-male version of an Oxbridge college or even Hogwarts, with long oak tables and benches, and food served by the resident staff, called (the very un-PC) ‘house boys’, the same staff who cleaned our rooms.

Following the formal meals, we were required to empty out into the Common Room and ‘take coffee’ with the Warden et al. Then, after coffee on weekdays, a unique Mardon ritual took place. (It was the same for the three years we six were there.)

In the Common Room there was a ‘radiogram’ – a now defunct piece of domestic audio equipment. As large as a student desk, our ‘Blaupunkt’ had a turntable, in-built multi-channel radio that you tuned by twiddling a knob, and with huge cabinet speakers. Always pre-loaded onto the turntable was Frank Sinatra’s recently released iconic LP, Songs for Swingin’ Lovers. As soon as the Warden had left after coffee, somebody would press a button and out would blast, “You make me feel so young …….” (If only, nowadays!)  Night after night, week after week, year after year, it was a permanent event after formal dining. It was Sinatra, backed by Nelson Riddle, at his finest. Then, one of two LPs always followed - either Elvis or Buddy Holly. It depended on who, among the two different sets of fans, could get to the turntable first. And at the same time, the call went out, “Four for bridge, anyone?”

There were ‘Formals’ every two years and ‘informals’ and ‘exchange lunches’, regularly.  A week after we arrived in September 1956, we freshers were told there was to be a Formal in November and Mardon was to be turned into a medieval castle. It was remarkable how much talent emerged from eighty-four students in terms of, design, artwork, scene construction, and the sketch writing and staging of a cabaret. We were also told by our legendary and fearsome Social Secretary, ‘Murph’, a.k.a. Derek Murphy, that we had to find female partners, send them a red or white rose corsage for their evening dresses and arrange taxis to bring them to Mardon and we had to accompany them home.  He threatened, “If you don’t find yourself a partner, I’ll find one for you! And if she turns out to be an East German shot putter, don’t blame me.” It wasn’t difficult to find partners even after only a few weeks at uni. A Mardon Formal was a sought-out, ‘big ticket’ event.

Informals, were run like what, years later, were called ‘discos’, and held on the same Saturday nights in all Halls. They allowed young ladies to come into men’s Halls officially on evenings, and vice versa. Formal exchange lunches were held by every Hall on the same Sundays, when Social Secretaries would have got together and scheduled swap arrangements with men invited to ladies Halls for lunch and vice versa.

Mardon was an institution and has been a lifetime Club of sorts. Mardonians called themselves “The Gentlemen of Mardon” publically, “chaps” privately and were called “Brylcream Boys” by detractors – after the leading male hair product of the day, a cream resembling mayonnaise, which slicked unruly hair down to avoid a ‘Boris look’.

For the six of us, and, especially, Mark Mills, Brian Pring and myself, who shared Mardon’s only three-bedded room on the second floor corner of Hall in our 1956-57 fresher year, revisiting Mardon, over decades, with wives, children and even grandchildren, it has remained  ‘special’. So how was our 60th reunion? To use a modern expression, not used in our time, “Amazing!”